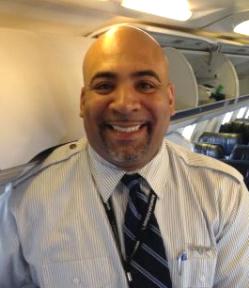 When Chicago was hit with nearly 20 inches of snow recently – the fifth largest snowstorm ever to hit the city – it slowed Envoy’s operation down dramatically. While the team deiced departing aircraft to free up gates for inbound flights, there were numerous delays and missed connections.

While waiting on a Chicago taxiway for an available gate, Flight Attendant Will Baker knew that many of his passengers would not make their connections. Using his personal cell phone, Will called the terminal and reached Passenger Service Agent Amber Thomas to coordinate the rebooking of many delayed passengers on later flights.

“Amazing service, while we were stuck on O’Hare’s runway,” wrote one grateful customer who emailed from the plane. “This was really above and beyond the call of duty.” Another customer on the plane wrote to add, “He’s still at it! You’ve won me over as a customer. I’ll bring all my business – and my company’s business – to AA!”