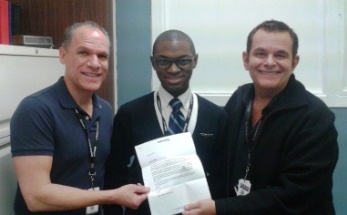 The Envoy President’s Award recognizes individual employees who represent the best of Envoy, consistently going above and beyond – for customers and colleagues alike. Nominated by their peers and selected from among dozens of nominations, 23 employees received the award for 2014.

Shown here is New York-based Flight Attendant Kendrick Williams, who was recognized for his compassionate assistance to an ill passenger. He was presented his award by Association of Flight Attendants (AFA) Local President Jon Orozco and Flight Service Manager Robert Kuhlenschmidt.

« Celebrating success in Monterey
Hats off to Miami’s Yesenia Alicea! »