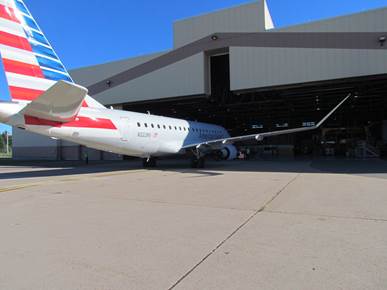 By Jason Markle, MQT Base Coordinator

GWINN, Mich. – On the weekend of September 2-4, our base had the opportunity to see one of Envoy’s new aircraft firsthand. The Embraer 175 (E175) arrived in Marquette County, Michigan (MQT) just after 5 p.m.,

and was towed into Hangar 664 by maintenance personnel from the afternoon shift. One of the primary tasks for the aircraft’s visit was to make sure that our hangar space could house the E175, and allow us to work on it unhindered. This was a major success, which was more notable by the fact that we were able to place it in the hangar with a Canadair Bombardier 700 (CRJ700) at the tail dock. 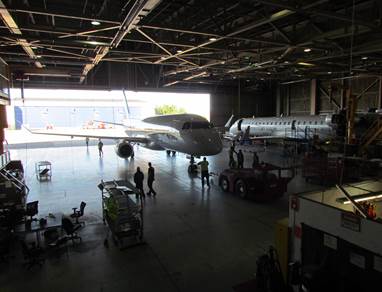 On Friday, our day shift had the opportunity to receive some valuable hands-on training. Many of our mechanics had been through the E175 Familiarization Course, but very few had the opportunity to get some practical experience on the aircraft. The mechanics that did have experience, like Crew Chief Dan Rogers, helped to conduct small training sessions for the other mechanics. While we were not able to have all shifts involved, due to time constraints of the E175’s schedule, it did prove to be a valuable learning experience.

Our base also had the opportunity to showcase Envoy’s new aircraft to members of the Marquette County Board of Commissioners and members of the Airport Authority. The guests toured the aircraft guided by Director of Maintenance Mike Roe. Airport Manager Duane Duray and County Administrator Scott Erbisch were impressed by the aircraft and the opportunities that will arise for both maintenance and revenue flights here in MQT. 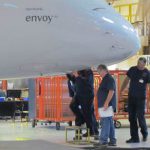 Employees at the station got time to train on the E175 on Saturday and Sunday. MQT Station Agent George Paulson, who recently completed the “Train the Trainer” course on the E175 Gate/Ramp Familiarization in Charlotte, North Carolina, led the training for the MQT agents. The agents were qualified on security and safety procedures, as well as cargo and door operations.

“This is all very exciting,” said Station Agent Kayla Wallace, an attendee of the Sunday session. The sentiments were echoed by her co-workers and MQT General Manager Don Cram.

“This was a great opportunity for our agents,” said Don. “It would be great to have the aircraft come up here on a more frequent basis as it would definitely provide an important and much needed service to the local community.” 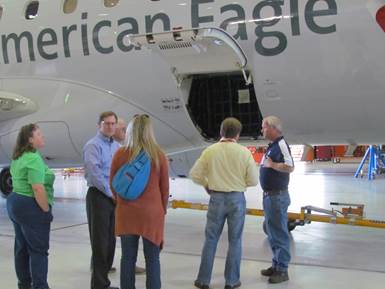 The E175 (tail number, N222NS) departed Sunday afternoon having accomplished our tasks in MQT. We would like to thank the company leadership for giving our base the opportunity to have the aircraft on site, as well as the flight crew that ferried the aircraft up here. We would also like to thank Mike Roe, Don Cram, the supervisors and crew chiefs, and the employees that were involved for their enthusiasm, dedication and hard work they put into making this a successful visit.