His hands are always folded in front or behind him. His shoulders are always pushed back. His uniform is always crisp and impeccable. No hair on his head is out of place. He always greets his customers with a smile that beams from ear to ear.

When he is in “airplane mode,” Daniel Ignacio de la Fuente Mora is always an absolute professional. Due to his tidy and meticulous nature in the workplace, the 33-year-old has received numerous customer kudos on top of a 2015 Envoy President’s Award for going above and beyond his duties as a flight attendant.

There are many reasons why Daniel is a Superstar Employee, but his attention to detail is the most foundational. As a Flight Service Instructor, he has taught dozens of incoming flight attendants the importance of detail and being professional.

In his classes, he teaches five key principles to professionalism in flight service: image, presentation, smile, leave your troubles behind and have fun. The first three are vital to providing excellent customer service while the last two are necessary for positive mental disposition in the workplace, Daniel says. 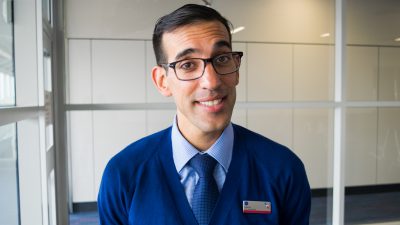 “I always tell them, I’m not trying to create clones, I’m trying to bring the professional out of you,” Daniel says. “We’re all professionals. We have to act like one, and we have to be one. We’re not just a flight attendant.”

During flight service, Daniel walks the aisles like the maître d’ of a 5-star restaurant. He engages each and every customer with confidence and respect. A smile never leaves his face as he speaks with the passengers. He treats his customers like friends and family, like esteemed guests in his immaculate home.

Yet, not every customer can be satisfied, and this is where the positive mental disposition comes into play. Daniel tells the story of a customer who could not be pleased. His every move bothered her. She yelled at Daniel for placing her bag in the wrong spot. He could do no right.

Instead of growing despondent and bitter, Daniel ramped up his kindness and professionalism.

“I kind of got frustrated too, but in the back of mind I thought, never!,” Daniel says. “So what I did, I thought, you know what? I’m going to give you the best experience ever! So, I did, and you know what happened at the end of the flight? She apologized. That’s why you never take anything personally. Just understand it, and make sure they have the best flight.”

Daniel hails from Santiago, Chile where he plans to return someday. Most of his family lives in Salt Lake City, Utah, and he also has close ties to friends in Hawaii where he went to college. Daniel holds a bachelor’s degree in International Business from Brigham Young University-Hawaii and a master’s degree in Administration from the University of Phoenix.

Before becoming one of Envoy’s top flight attendants, Daniel worked for the Ritz Carlton hotel in Santiago and in other high-end hotels for over four years. There he learned the importance of image, hospitality and professionalism that he carries over into Envoy’s aircraft cabins. It’s no wonder he carries a handheld vacuum in his suitcase; he’s a product of the Ritz Carlton!

As is par for many Envoy employees, he is an international jet-setter who has been to dozens of places around the world. Daniel says that most of his trips to places like Machu Picchu, Patagonia, Israel and Europe are usually done with family on hiking and biking excursions. He loves to backpack and visit these places with an anthropological lens, he says.

You wouldn’t know it by looking at Daniel in uniform, but when he’s on vacation or just relaxing at home, he lets his goatee grow out. He wears T-shirts and basketball shorts. He wears sandals. He enjoys a lazy day with his feet up and not a worry in sight. 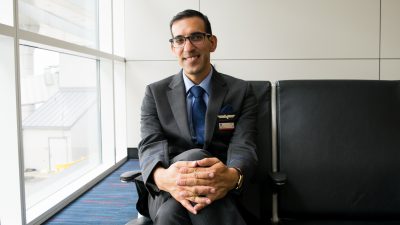 Daniel explains that he doesn’t always have to be on point. He can cut loose and relinquish his post as maître d’ of an Embraer 175. But, as soon as he clocks in – CLICK! – he’s back in “airplane mode.”

It is this ability to consistently provide spectacular and professional customer service that has garnered so much praise from his customers and peers. And, for Daniel, the feeling for Envoy is mutual.

“I love it here! If it wasn’t for Envoy I don’t know if I would be a flight attendant,” Daniel says. “I look forward to coming to work even if it is at 3 o’clock in the morning. That’s how you know you love your job!”

As he sits, his legs crossed with his hands on his knee, he recalls some of his favorite moments as an Envoy flight attendant. With barely a prompt, Daniel tells of his most rewarding memory.

“There was this woman with two children, and she hands me a napkin, which now I carry with me all of the time,” Daniel says. “On that napkin she wrote, ‘thank you so much for being nice.’ She said she lost her husband a year ago and she lost her phone with all of his photos. But, I made her forget that during the flight just by being nice. That taught me that it’s important to always be nice, because you never know what that person is going through.”