You’ve probably seen one before. In front of a neighborhood grocery store, between the soda machines and stacks of firewood, there sometimes sits a bumbling coin-operated kiddie airplane ride. To some, this is the only cockpit fit for a 5-year-old.

At 5-years-old, Nicole Mott was flying a real plane – albeit under adult supervision. It’s one of her earliest memories, and it stuck with her up to the moment of choosing a career in high school.

Part of Parchment School District’s Education for Employment Program in Michigan is the opportunity for high school students to delve into a career of their choice including courses in business, health sciences, natural resources and technology. Nicole, a native of Kalamazoo, Michigan, chose aviation.

“My dad basically sat me down and asked, ‘what do you want to do with your life?’,” Nicole says. “He just wanted to make sure that I chose a career path that I will enjoy, and essentially not have to wake up every day and say, ugh, I have to go to work. And that’s how it’s been. I really enjoy being here.”

At 25-years-old, First Officer Nicole Mott has been flying jets at Envoy for two years. She says she loves coming to work, loves the people and most of all loves to fly. 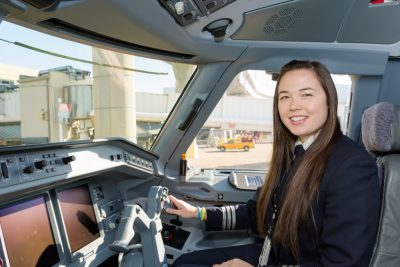 Whether it’s the cities she flies to, the places she gets to see or the old friends she runs into in various airports, Nicole’s glad she chose Envoy. She is especially proud of the training she underwent when she came to Envoy.

“When I was looking for a place to work, I heard that our training program was one of the hardest, but one of the best,” Nicole says. “That was really appealing to me, because I want to be sure that the person I’m working with has the same quality of training that I have.”

Besides “doing the ups and downs” at 5 years old, Nicole says the first time she flew a plane she was incredibly nervous. She looked at the tiny Cessna 150 in front of her and thought, there’s no way I’m getting in that thing.

But her family friend, who took it upon himself to instruct Nicole how to fly, calmed her down and encouraged the reluctant Nicole to pilot the Fiat-sized aircraft. Once she finally gave in and got behind the controls, she fell in love with flying.

After graduating from her high school aviation program, Nicole enrolled at Lewis University and then transferred to the bigger Western Michigan University, one of Envoy’s partner universities, where she earned her bachelor’s degree in Flight Science.

Nicole aspires to upgrade to Envoy Captain and looks forward to the day she will flow through to fly for American. For now, she takes pride in her accomplishments and is proud to be a woman in aviation.

She’s a member of Women in Aviation International (WAI) and has attended a few conventions. She loves the feeling of being surrounded by like-minded women and tries to harness that positive energy. Even though she knows the percentage of female pilots is small, she’s encouraged by the many women she does encounter, she says. 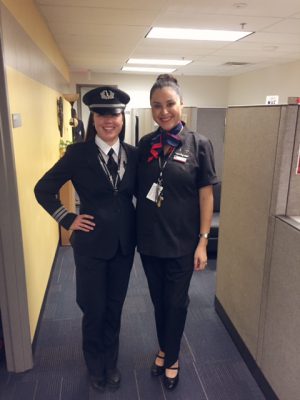 Overall, Nicole doesn’t feel there are any advantages or disadvantages to being a female pilot, and that she wishes more girls would consider a career in aviation, she says. She thinks of herself as an example to young girls that it is possible to be a pilot, and there shouldn’t be any apprehension.

Nicole cherishes her job and is thrilled every day she gets to fly. She enjoys walking through the terminals in her uniform, meeting new people, seeing new places and feeling like she’s never really working. However, she says she misses the days of flying a Cessna and dreams of owning one someday.

“It’s fun to take your family and friends up and say, hey, you want to grab lunch in a city 200 miles away, or go to the beach just for fun?” Nicole says. “I would just love to go on little, fun trips to remind myself that’s why I fell in love with flying in the first place.”