At 30,000 feet above sea level in the Earth’s atmosphere, temperatures can reach as low as -45 degrees Fahrenheit. That’s cold enough to do serious harm to the human body including hypothermia and frost bite.

These extreme cold temperatures did not keep Pilot-Legend Jackie Cochran from breaking the record for highest altitude reached by a woman on March 24, 1939. Better yet, Jackie conquered this feat in an unpressurized, non-heated Beechcraft D17W “Staggerwing”.

Jackie writes in her book The Stars at Noon about the harrowing conditions:

Jackie had a knack for developing much-needed changes within aviation, namely the military. In 1940, Jackie reached out to Eleanor Roosevelt to propose the creation of an all-woman pilot division to fill in for male pilots sent overseas in combat. 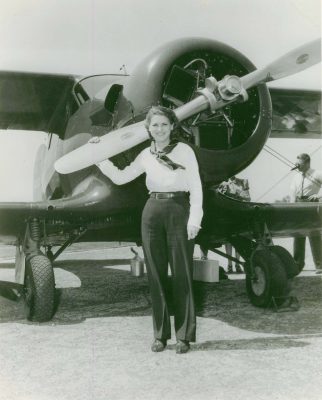 Jackie went on to receive many military awards including the Distinguished Service Medal for her service and directorship of WASP. She later joined the U.S. Air Force Reserve as a lieutenant colonel.

After her military career, Jackie set numerous records for flying including the first woman pilot to break the sound barrier. On May 18, 1953, Jackie flew a Canadair F-86 Sabre where she reached an average speed of 652.337 miles per hour and in the course of her flight went “supersonic.”

All throughout the military Jackie made many friends in high places including General Chuck Yeager, General Hap Arnold and President Dwight Eisenhower. In fact, her friendship with “Ike” encouraged her to engage in the political arena where she eventually ran for U.S. Congress in 1956, where she lost to the first Asian-American Congressman Dalip Singh Saund by a very narrow margin.

The vast and inspirational life of Jackie Cochran cannot be simply condensed into this blog post, but it’s important to share her accomplishments with all the young pilots looking to join the ranks of the aviation industry. Jackie Cochran’s life is best served as a reminder that no matter a person’s gender or background, if that person is persistent, they can achieve their loftiest goals and beyond.

The Stars at Noon: Jacqueline Cochran

When Our Mothers Went to War: An Illustrated History of Women in World War II: Margaret Regis