My first trip ever to Washington D.C. was finally happening. I had been waiting months for this opportunity to cover the legendary, iconic and perfectly photogenic metropolis.

Yet, not only was my camera going to get work, but so would my heart. See, this trip was more about the passengers than the destination, and I would soon find out why.

Beginning on May 29, Memorial Day, I joined the Brookshire’s Heroes Flight, which brings U.S. Military Veterans to Washington D.C. for a tour of its many memorials and monuments. As sponsor for the trip, Envoy would be providing volunteers and a chartered flight aboard an Embraer 175 (E175).

Here, I’ll recount our second day on the trip. It was certaintly a long day full of sight-seeing, walking and, best of all, getting to know our veterans a little bit better. We started early in the morning with a trip to the Arlington National Cemetery. 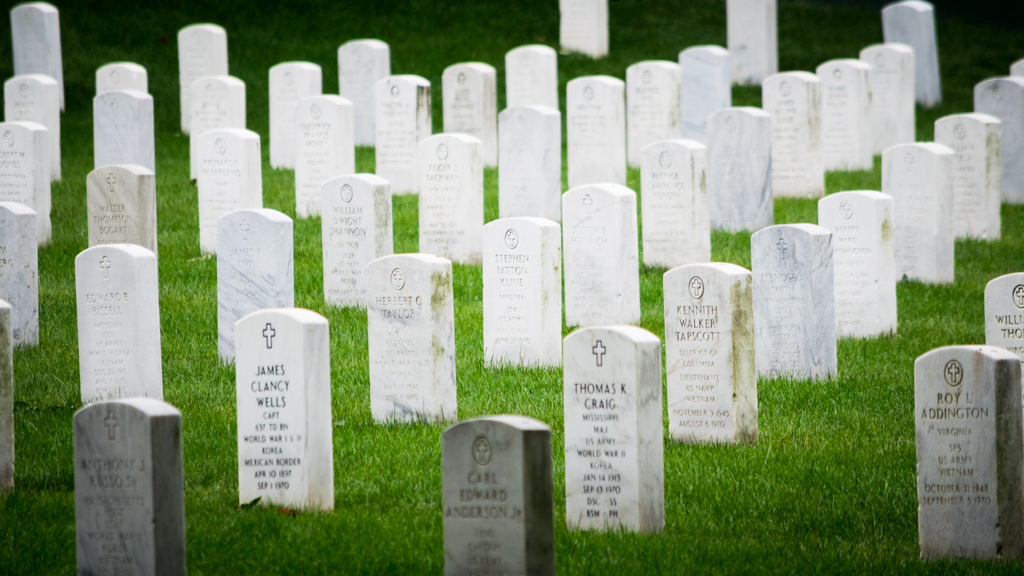 Just after the sun made its way into the cloudy, gray sky, we paid a visit to the Arlington National Museum to witness the Changing of the Guard at the Tomb of the Unknown Solider. The moment seemed so surreal from the somber sky to the silent grounds.

The guards moved with a mechanical precision that impressed our veterans who looked on in amazement. Watching how serious each guard took their duty and how every person at the Tomb paid ultimate respect, I had a humbling moment that made me appreciate what our men and women in service do for our country every day.

Although I had never been there, many of our veterans had. Like Mr. Thurman Smith who told me that the last time he was at the Tomb of The Unknown Soldier he was photographing Princess Elizabeth and Prince Phillip before she was crowned as Queen of England. 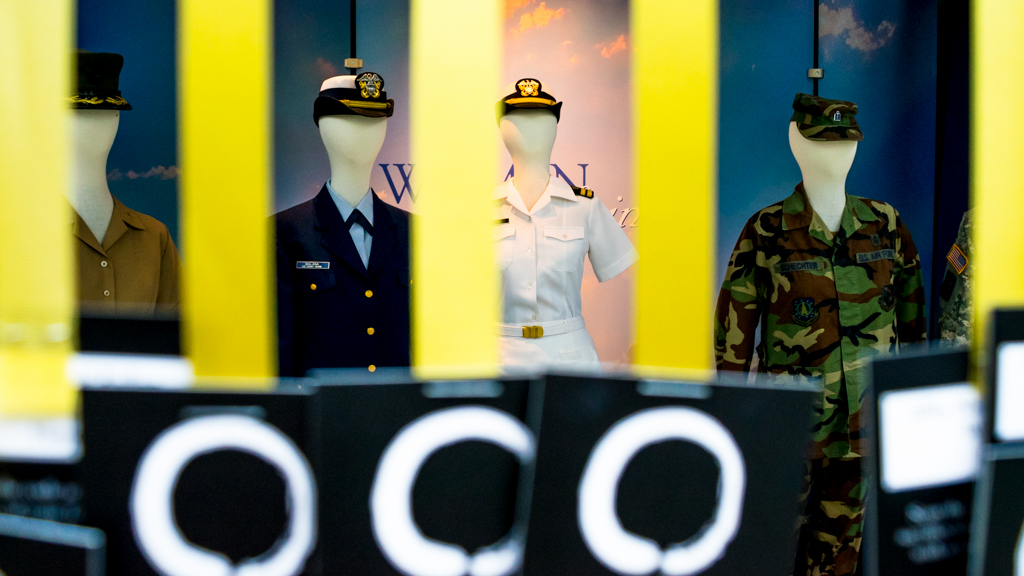 Right outside the cemetery is the Women in Military Service Memorial which featured memorabilia from women serving in the U.S. Armed Forces. There were uniforms, paintings, movies, and photos honoring women and their service to America.

One interesting installation was thousands of yellow ribbons with black cards hung in front of the exhibitions like a curtain. Each ribbon and card symbolized a “fallen warrior” who died in service since September 11, 2011. 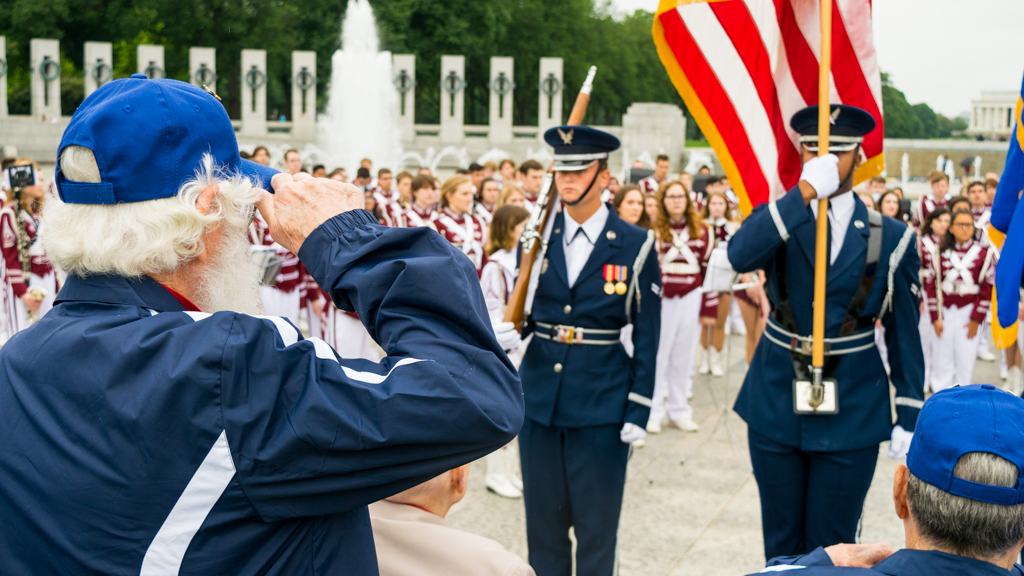 The grandest spectacle of the entire trip took place at the massive National World War II Memorial where the Whitehouse High School Band from Whitehouse, Texas and its 300-plus members played for our group of World War II veterans. Dressed in maroon and white, the high school students played patriotic arrangements and engulfed everyone in emotion. 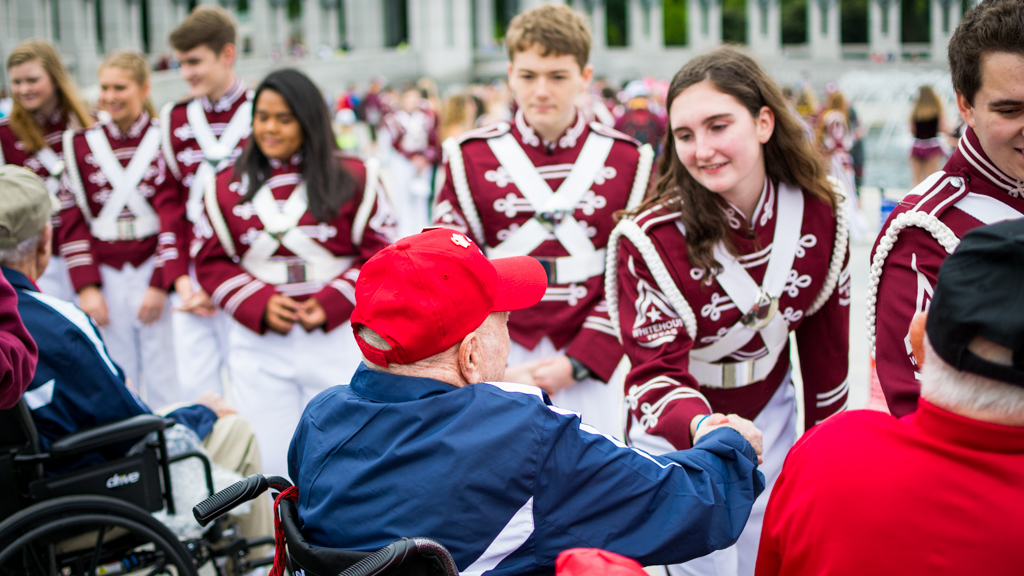 After the performance, one by one each member of the Whitehouse Band lined up to thank and shake the hands of our veterans. Some shared stories, some asked for autographs, but most everyone just wanted to show gratitude for their service.

After 30 minutes of the band lining up to meet the heroes, other visiting tourists began to join in the handshake-line. Eventually, we had to stop people from joining the line, because we would have stayed there until the entire population of Washington D.C. thanked our veterans! 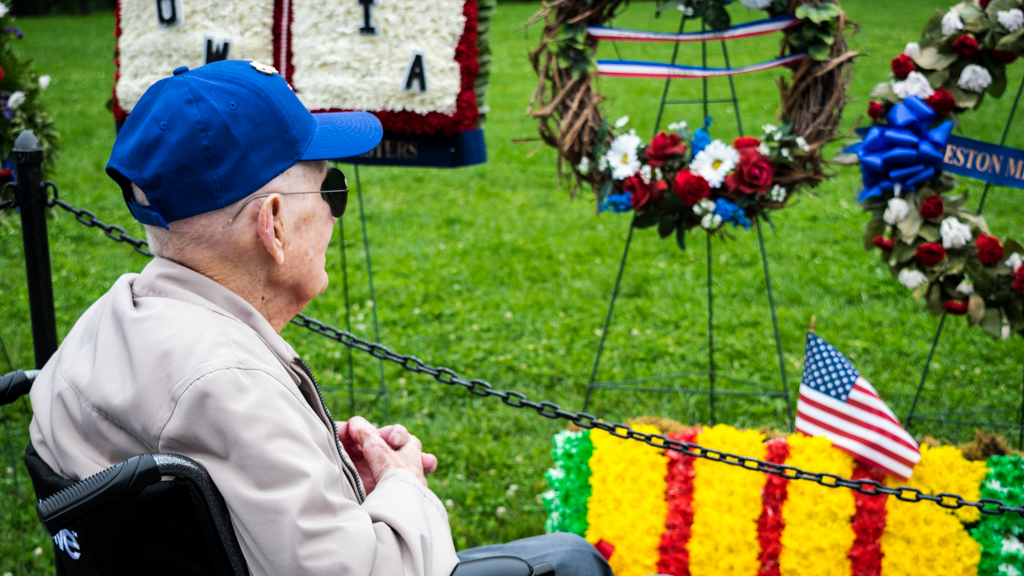 At the Vietnam Veterans Memorial people gathered in a long cue to view the polished black wall of names listing the Vietnam War veterans who died during and after the war. On the opposite side of the walkway along the black granite wall were rows of wreaths and flags commemorating service members from the Vietnam war.

Nearby, a statue depicting three young soldiers in the Vietnam War had some peculiar traits, as one of our veterans pointed out. He pointed to their bandoliers, and showed me how their bullets are upside down to symbolize the upside-down nature of that war. 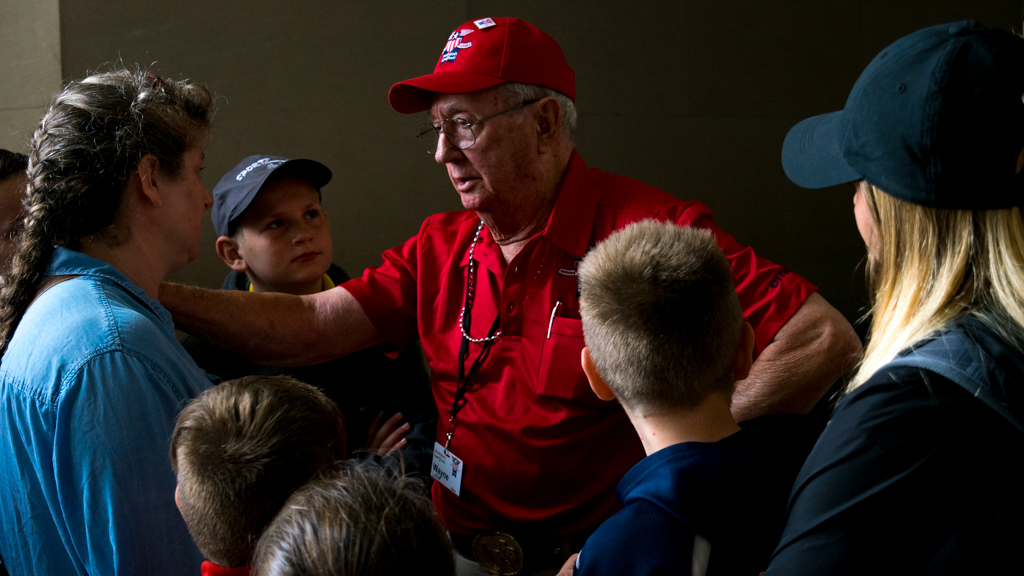 Once again, at the Lincoln Memorial, our veterans were surrounded by tourists who just wanted to meet the men and women who served for our freedoms. Like something akin to a preacher or an international sensation, Mr. Wayne Luther (shown above) talked to a group of people eager to hear what he had to say. 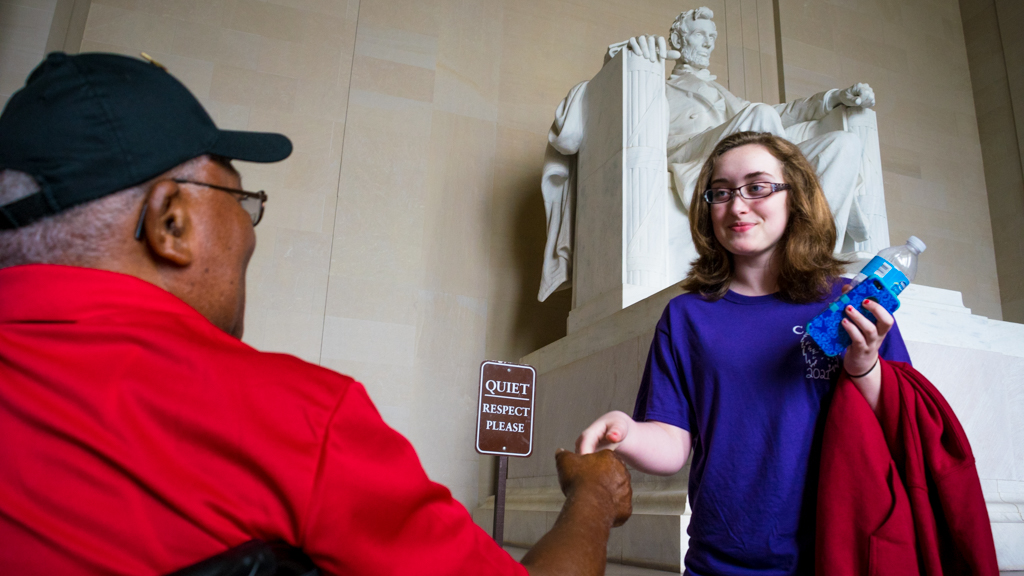 Mr. Cleaurthor Sanders also met his fair share of thankful Americans. Yet, he was most excited about meeting the big man in the big chair; President Abraham Lincoln.

“I never thought I would meet Lincoln. I think I might cry,” said Mr. Sanders. 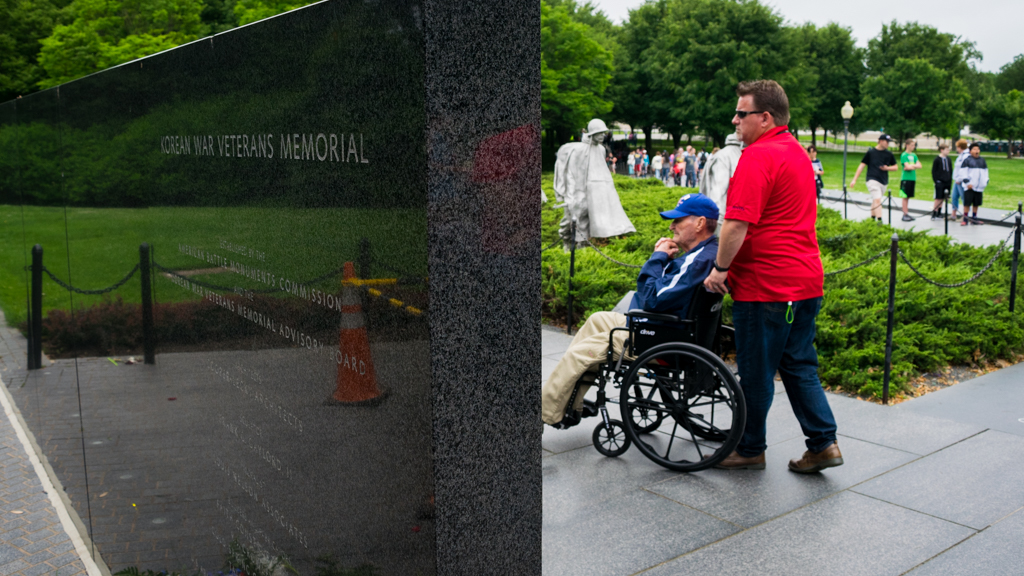 The Korean War Veterans Memorial was one of the more otherworldly sights on the trip with its installation of statues depicting a troop of soldiers walking through a field. They seemed to be alive and talking to one another, which made you feel like you were a part of their mission. 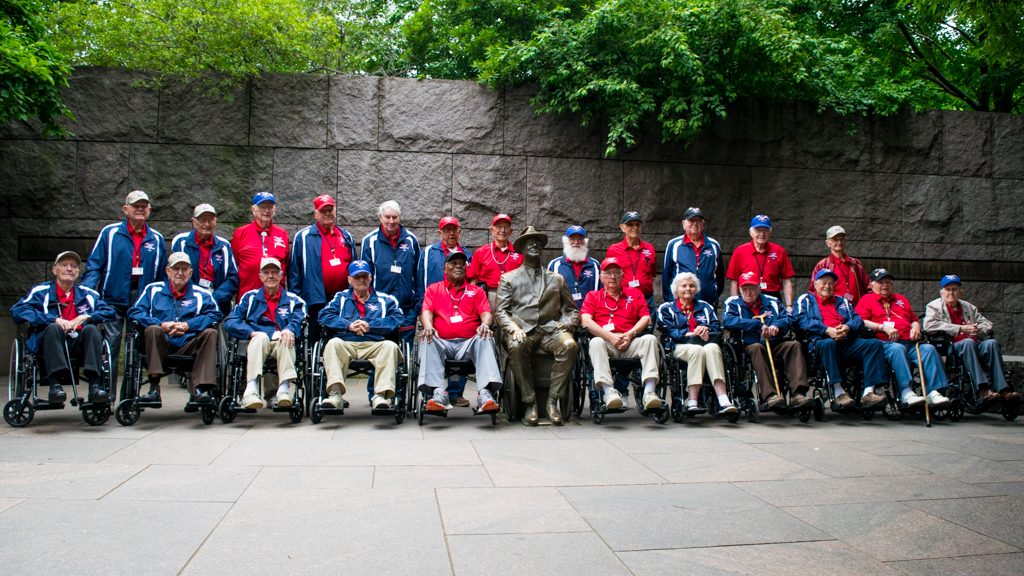 My favorite stop of the day was at the Franklin Delano Roosevelt Memorial, which honors one of America’s best and most prestigious presidents. The multi-room memorial took you through the timeline of all four terms of FDR’s presidency with statues, artwork and engraved quotes from the leader of the 20th century progressive movement.

As we walked past statues depicting the Great Depression, many of the veterans looked on with expressions of sorrow and pain. I could hear them saying, “There’s your sharecroppers, so sad. That was my parents” and “I remember those times. They were not good times.” 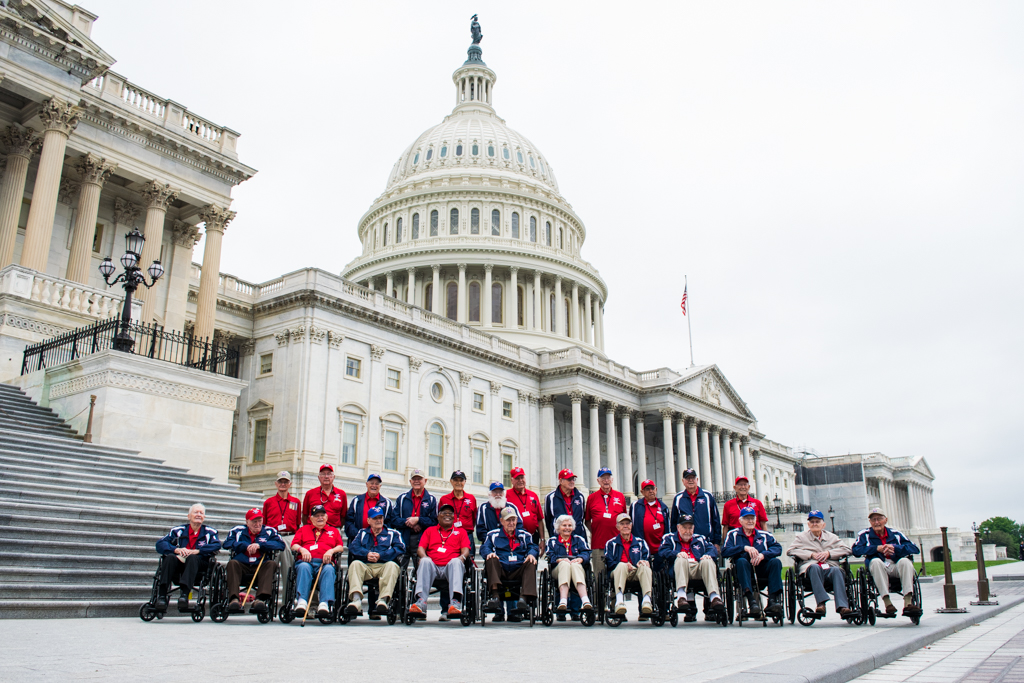 During the trip, we were connected with U.S. Representative Louie Gohmert from Texas who was kind enough to host a very exclusive visit to the U.S. Capitol building. Amazingly, we were given access to the House of Representatives and Senate chambers; somewhere the general public may only ever see on television.

Everywhere we went was steeped in history but still part of the present, like a living museum. Floor-to-ceiling oil paintings filled up every wall. In the main rotunda, statues of historical figures surrounded us like an army of dignitaries.

Many of the veterans I spoke with said that touring the Capitol was the most special, because it showed them how appreciated and honorable their service was and how much it means to our country. They were given one-of-a-kind access for their one-of-a-kind sacrifice. 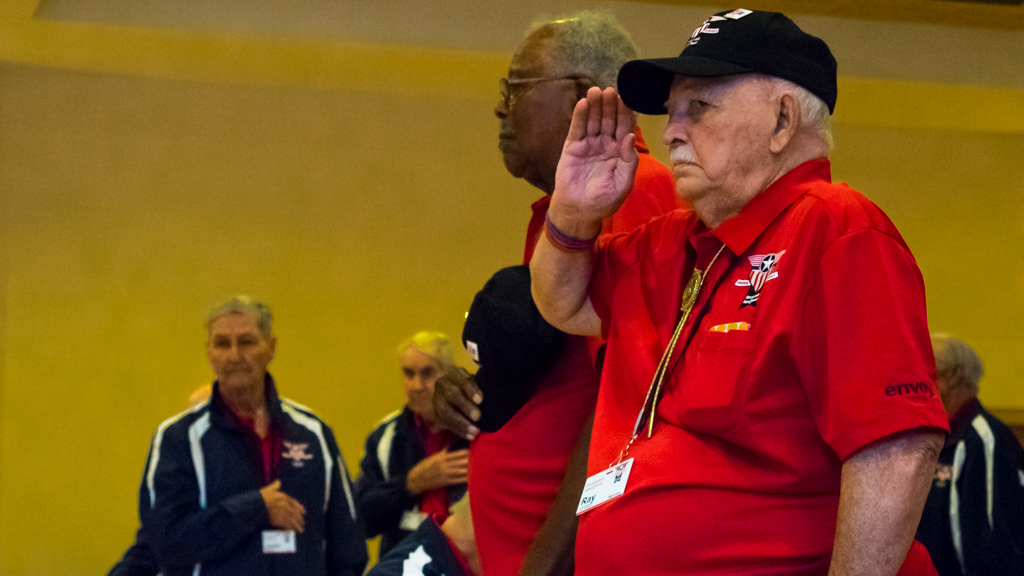 The day ended with a much needed dinner provided by the Knights of Columbus in Arlington, Virginia in their clubhouse. As we approached the building, a line of people gathered to welcome our veterans with hugs, handshakes and…swing dancing?

That’s right — during our dinner, a group of swing dancers dressed in 1940s-era clothing performed to songs that were popular during World War II like “Sing Sing Sing” by Benny Goodman. The most memorable moment from the dinner, however, was the presentation of flags from members of the military dressed in full uniform.

While the cornet player belted out “Taps” on his shining silver horn, our veterans fell silent out of reverence for the men and women in uniform holding the flag of the nation for which they fought. I couldn’t help but take a moment from snapping off photos — I didn’t want to ruin the moment with the sound of my shutter.

Alas, it was a very relaxing dinner full of conversation and laughter. At one point, Captain Kinner was swept away to dance with one of the swing performers; another great ending to a long day I will never forget.