Last year, Envoy announced that it would be opening a much needed maintenance base in Little Rock, Arkansas (LIT) to support our growing fleet of Embraer 175 (E175) regional jets. Since then, we have been hiring new Aircraft Maintenance Technicians (AMT), forming the leadership group to supervise the base, and acquiring the necessary tools and space to maintain the aircraft.

On June 12, a few dozen Envoy AMTs, supervisors, crew chiefs, engineers and construction contractors all pitched in to perform a “test fitting” of two E175 aircraft into the new hangar at LIT.

“The test fitting is just one more step to officially opening the Little Rock base later this summer,” said Envoy Vice President of Maintenance Jay Murray. “A huge congrats goes out to the LIT team that successfully completed this special project. We’re excited to get operations underway, and look forward to working with the outstanding AMTs who will begin a new journey at this beautiful new facility.”

Leading the project was LIT Base Manager Terry Butler who was kind enough to answer some questions about the operation. The interview with Terry continues below: 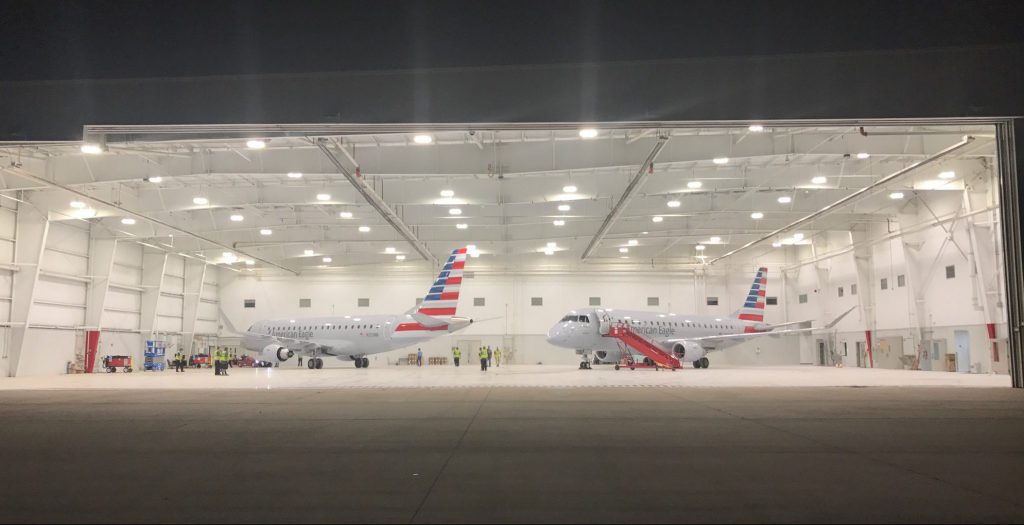 What are the logistics and challenges of bringing aircraft into a new hangar for the first time? How did you overcome them?

First, we worked with maintenance planning to create a gap in our maintenance program to accommodate having the aircraft free for the night to move around. The next challenge was the weather; the flights ran late, we had weather moving in and needed to stay on top of moving the aircraft in.

The hangar is new to Envoy and has height constraints, so teams of engineers reviewed ceiling height and obstacles. We had a plan going in and took our time with our group of new hires that have spent the last six months or so training and preparing for this day.

What are the procedures you must follow and how do you go about making sure you stick to them?

In this case, we brought in the whole leadership team to ensure we took it slow. We looked at every possible angle and identified most of our areas of concerns.

We knew going in this would be a tight fit. Going into a new building with a new airplane is a bit challenging, but, personally, I was at ease with our team pulling this off the second that the first aircraft came through the door.

It must have been exciting to pull it off, what was the general mood once you completed the project?

Exciting and very upbeat – all hands on deck! Everyone stayed close and in front of every task at hand. One thing that stood out was that everyone had a sense of urgency all while maintaining the level of safety!

Does this test fitting signal any kind of benchmark at LIT? Does it mean operations can now ramp up?

We can work one aircraft in the hangar at this time, and we have been continually ramping up the maintenance operation full steam since December of last year.

We anticipate the permanent move will be some time in August, and at that time we will be 100 percent in business!

How does this project affect AMT hiring in the future?

New AMTs may have never moved an aircraft such as this, and using the Lektro pushback (electric aircraft tug) we have is the only way to fit multiple aircraft in this hangar. So, right now, it’s important to train all of our new hires on this equipment.

LIT is on the path to succeed and take the performance bar to the next rung.

What is your take on Envoy’s growth and future in regards to its maintenance operations?

At LIT we have new equipment, computers and work spaces and we are an exclusive E175 base.

Our leadership team is very experienced and motivated to be a successful contributor to the entire system. LIT currently has a group of folks that step up to learn and work together to make it all happen.

The leadership team welcomes our new employees with open arms and is excited to teach and share our experience.