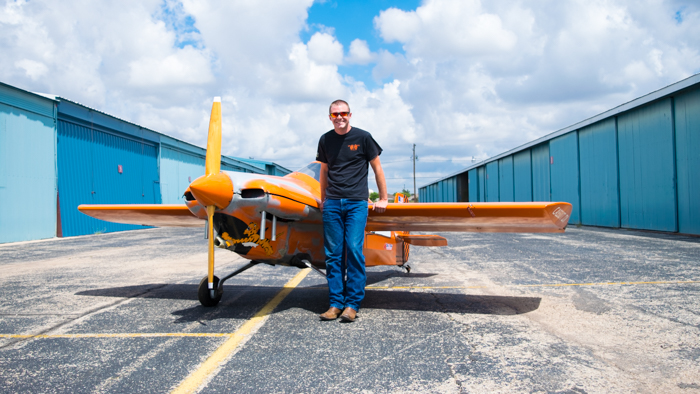 For miles, there’s nothing but oil derricks and blue sky, and then Joseph Clark takes a turn into the parking lot of an old warehouse complex. The long, aluminum-sided buildings are lined up in rows with their aqua blue sidings shimmering in the midday sun.

Joseph pulls his Mini Cooper over next to a rusty door, pulls it up over his head and smiles. Inside his hangar, which resembles more of a small storage unit, are shelves stacked with tools, machine parts, paint – you name it.

In the middle of the hangar is a small orange, black and white airplane, which, as Joseph calls it, looks like “a motorcycle with wings.” Joseph takes a wool blanket and begins dusting off the wide, wooden wings.

On the plane’s fuselage the name Tigger is painted in orange cursive.

The race is on 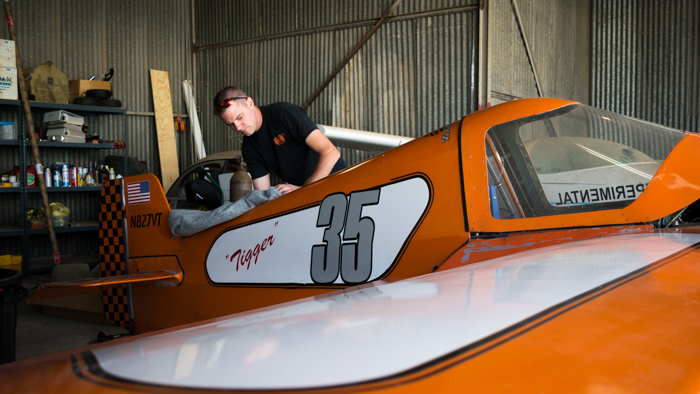 In a couple of weeks, Joseph and Tigger will be flying, dipping and looping at the Reno Air Races. An Envoy First Officer in training, Joseph has been sponsored by Envoy, and given decals to attach to Tigger’s wings as he races in the dry desert of Nevada.

He raced last year, placed sixth in the Formula One Bronze class, but hopes to do even better this year. Since then, he has been working tirelessly to upgrade Tigger.

Two years ago, Joseph bought his tiny, orange racer from Canada at a reasonable enough price for him to justify making the investment. When he brought it to the desert of Odessa, it was a rickety machine that looked like it could barely roll let alone fly.

Since then, Joseph has made a few modifications to the body and replaced the pistons. Next, is to touch up its paint and add aerodynamic covers to his tires.

“In these races, how much you spend plays into how fast your plane flies,” says Joseph. “The changes I made should make me faster and fly higher, but I’m paying for this plane out of my own pocket. For me, it’s a hobby that I’m really good at.” 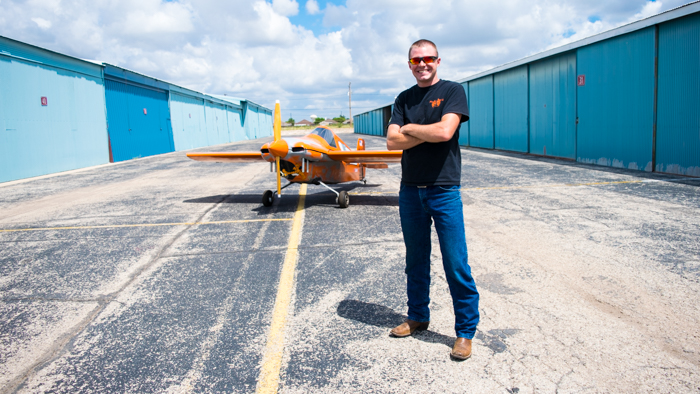 At 15 years old, Joseph was bit by the pilot bug when he took his discovery flight in Albuquerque as part of the Young Eagles. Since then, Joseph has flown 35 different aircraft types in numerous capacities.

Directly out of high school, Joseph went into flying corporate aircraft for oil-company executives in the Odessa area. He earned enough money to buy himself a car and pay for tuition at Odessa Community College where he studied criminal justice. 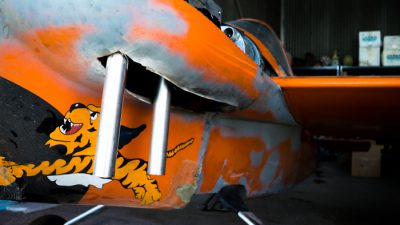 “I learned from a very strict flight instructor who would chastise me if I was even a hair off track,” says Joseph. “I take that very same discipline and apply it to my flying style. In fact, I’m glad to be on the Embraer 145, because I get a little bit more control on the flight deck.”

The total command of his aircraft and a strict attention to detail also makes Joseph a pretty good racing pilot. A few years ago, he was introduced to another racer and was encouraged to give it a try.

After his first run, he was hooked and enrolled in a racing school where he learned all about flying in tight formation and how to be a well-mannered competitor.

A good attitude and “playing nice” is key to becoming a successful racer, he says.

“It’s a unique type of flying that, while it’s incredibly fun, requires a lot of attention to detail to stay safe,” says Joseph. “When I’m racing for those few minutes, my knuckles are white, I’m incredibly focused and I’m sweating bullets. But when I’m back on the ground, I can finally exhale and enjoy what just happened.” 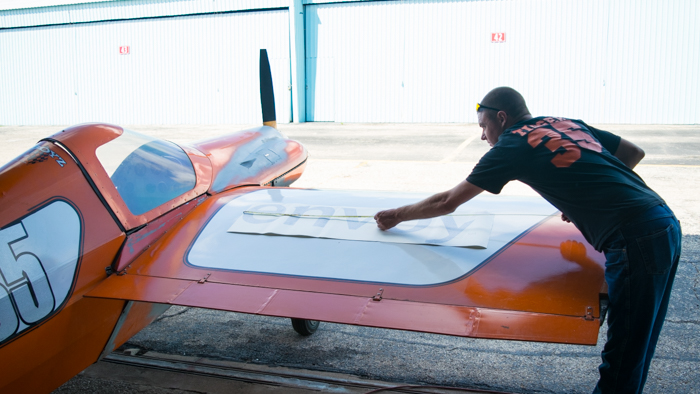 In Odessa, Joseph runs with a racing team called The Fly Boyz who practice frequently to keep their skills honed. But, racing is just a hobby, so flying with Envoy is a great way for Joseph to earn top-pay, great benefits and still have time to pursue his dreams of racing airplanes.

When he began his training at Envoy, Joseph says that he welcomed the tough training regiment because it fits his style. Plus, like the smart, young man he is, Joseph realized that joining Envoy guarantees him a lucrative position at American Airlines in a few short years.

“With the flow-through program, the great base options and signing bonus, Envoy is that perfect Goldilocks airline — just the right fit for me,” says Joseph.

In racing, there’s also a precise and perfect path that optimizes your speed and position. Joseph demonstrates with his finger an oval-shaped path and whistles as it goes around the imaginary pylon.

He says that a pilot has to race “on a wire” to be successful. Some get a little off course, some a lot, but, Joseph says, “me? I’m *whistle* on a wire.”

Next week, from September 13-16, Joseph and Tigger will travel to Nevada for the annual Reno Air Races. This year, he hopes to take home first place and a little prize money, but if not, he says, the “thrill of the race is payment enough.”

« Know your numbers? Intern with our Finance team!
Envoy Welcomes WMU Aviation Students Back to School »