On Wednesday, February 14, the Envoy team in Cedar Rapids (CID) gathered for a mystery ‘all-hands’ meeting.

“We’ve come a long way as a team, and this is a story all about teamwork,” opened Envoy CID General Manager Frank Dombrowski. “What happened that night in January showed how we can come together to achieve great things.”

And with that, the station realized why they were called together.

On January 3, a customer on another airline experienced a serious medical issue while in flight. Due to the severity of the incident, the Captain made the decision to divert to the closest available airport, Cedar Rapids.

There were just two small problems with that approach – that airline doesn’t operate in CID and the station doesn’t usually handle larger Boeing 737 aircraft. 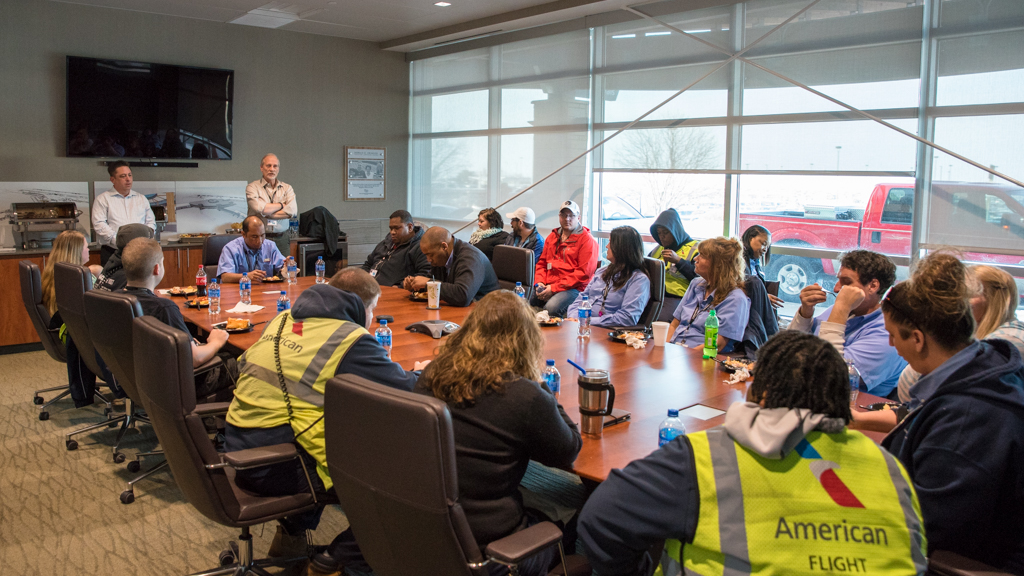 Medical diversions are part of running a safe operation, and are planned for in advance. Accepting the unique challenges of the situation, the Envoy team gathered the facts and prepared themselves for the diversion.

With the aircraft en route, Envoy and Iowa Public Safety officials worked together to coordinate their response once the aircraft was on the ground, knowing that every second counts in a medical emergency.

“The conditions were challenging and the team was working in -15 degree weather when the aircraft arrived,” said Lead Agent Shawn Mercer in his Real American Hero nomination. “On top of this, the team worked two inbound flights from Dallas/Fort Worth and Chicago at the same time!”

“I’d like to thank whoever scheduled our shifts that night – we had some new folks join the team and the extra staffing really helped out,” explained Station Agent Mary Baloch-Hadish. “Everything we needed, they were on it. There was a lot of back and forth that night.”

Aircraft on the ground, and another challenge 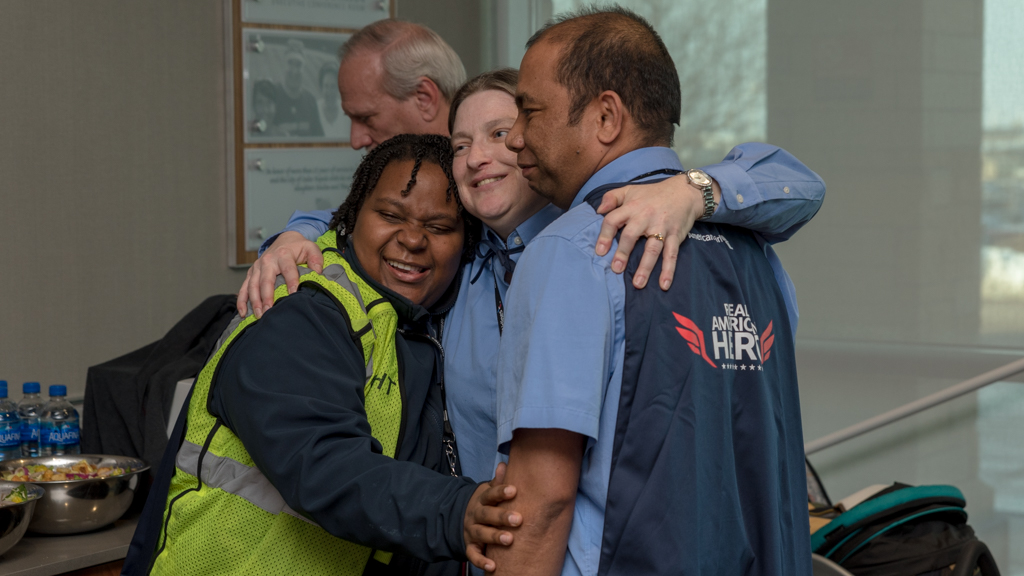 When the aircraft landed, the Envoy team helped park the plane and brought stairs to allow public safety officials to get to the ill passenger. Upon inspection, it was clear that it would be hard to get him safely off of the aircraft in his condition.

“We had to get creative,” said Mary. “We knew that our other airline colleagues in CID had a large beltloader, so we asked them to borrow it. Carefully, we positioned the belt at the rear door of the aircraft and the individual was brought down to the ramp, where an ambulance took him to hospital.”

“Through all of this, we kept in touch to keep all the pieces moving,” said Station Agent Rhonda Leith. “I think the infrastructure at CID really made this possible. We’re all here for each other and willing to step up when it gets tough or challenging.” 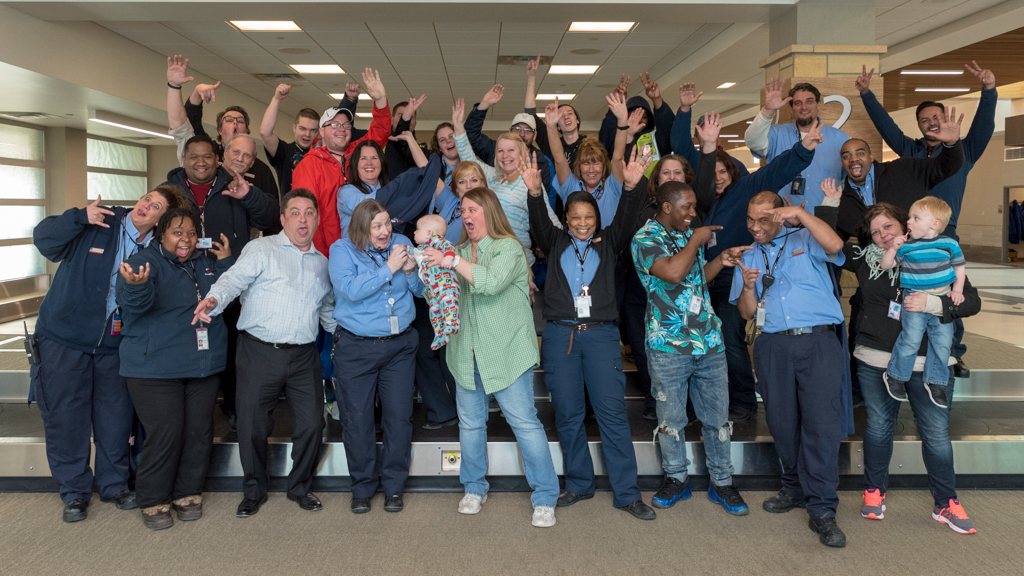 On the ground, the Envoy team provided complimentary drinks and snacks to help make the diversion as comfortable as possible. Once the ill passenger and his checked bags were removed from the aircraft, the plane continued on to its final destination.

“Airports like Cedar Rapids really are a community,” said Jude Mayeux, Envoy VP of Customer Services. “And when issues like this come up, different airlines come together to help out. That’s what is so great about this. The Cedar Rapids team – everyone from Envoy to our TSA, public safety and airport colleagues – did their best that night. It really was a team effort.”

Here’s to our Heroes 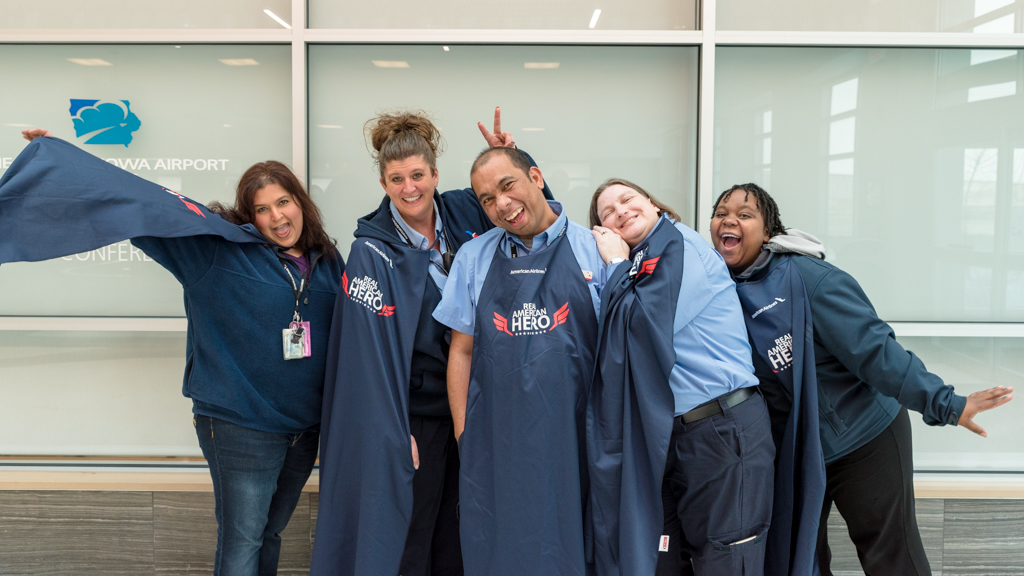 Mystery solved, the station came together on Wednesday, February 14 to recognize our heroes and share lunch together. Here’s to our Real American Heroes: Mary Baloch-Hadish, Souvenior Kabua, Rhonda Leith, Lauri Patten, Kaelen Tendick and Latonja Wright. Thank you for your bravery and teamwork!

The Real American Hero award is a special recognition program for employees of American and its wholly-owned subsidiaries. Awards recognize those who go above and beyond during a medical emergency at work. Nominations are submitted by coworkers and awards come with a $1,000 cash prize and a very special hero cape.