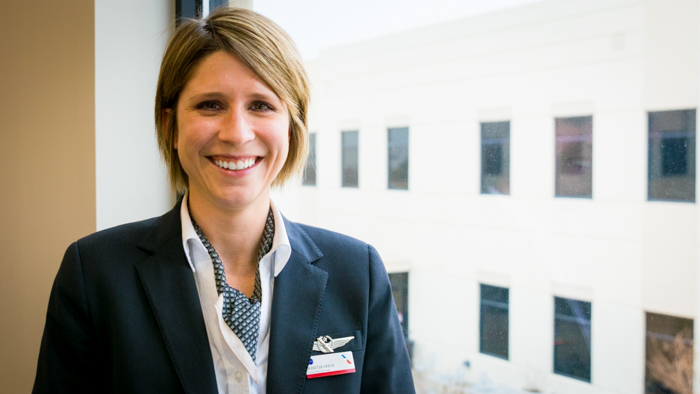 Captain Kiersten Orrick stood out like a sore thumb in her seersucker blazer, red blouse and blue Italian leather wingtips as she waded through a thicket of men in black suits. Apprehension began seeping in as her first National Gay Pilot Association (NGPA) conference started like every other pilot job fair Kiersten had attended.

During a moment of ‘what am I doing here?’ came a moment of salvation. Kiersten eventually found a group discussion only for the Women of NGPA, where she found the answer to why she came to Palm Springs for a four-day conference centered on the LGBT community within the aviation industry. 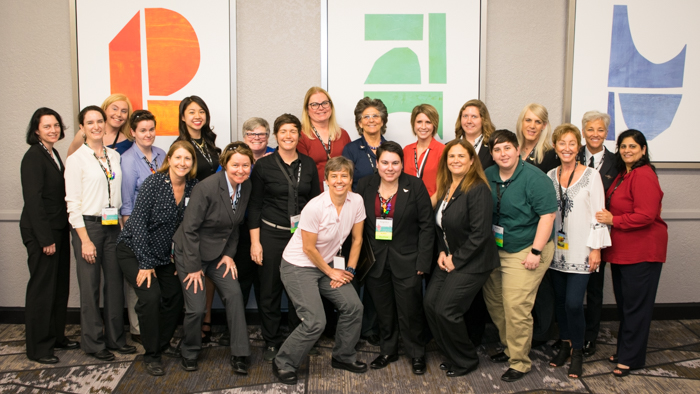 After engaging with living legends like Captain Kathi Durst (the first woman Chief Pilot for American Airlines in DFW), Captain Lauren Lee (a transgender woman flying for another legacy airline) and AA Captain Jan Anderson (Vice President of NGPA), Kiersten gained the comfort of being within a group of women just like her.

As an Envoy Captain and Check Airwoman, meeting women who have leapt the hurdles of not only being women in a male-dominated profession but also being in the minority in regards to their sexual orientation, inspired Kiersten to become more involved in the NGPA community.

“I felt like I found community within this diverse group,” said Kiersten. “It’s great to know that there are people out there taking strides to be more inclusive and prevent discrimination within the industry.”

She gets it from her momma 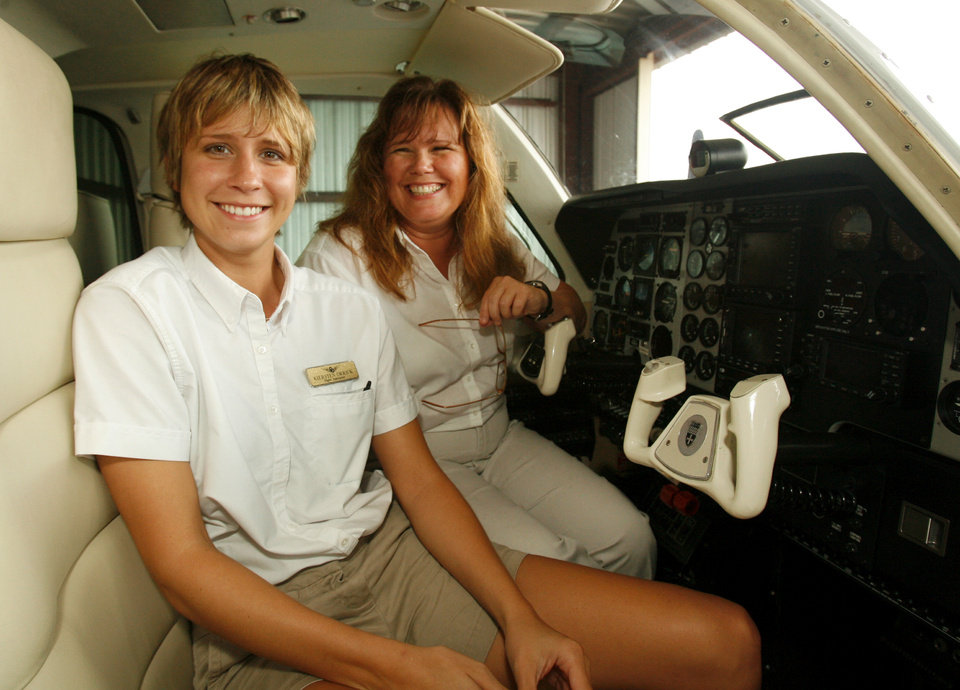 Her love for aviation dropped from the sky – quite literally – when Kiersten was a youngster, watching her mother skydive. She would sometimes accompany her mother on her dives, but it wasn’t the parachutes and sky-ballet that intrigued her, it was the pilots on the flight deck.

From then on, Kiersten’s path to a commercial jet was smooth like a clear, blue sky. She earned her private pilot’s license while attending the University of Oklahoma (one of Envoy’s first Cadet Program schools), and became a Flight Instructor there for four years before joining Envoy in 2010.

When she’s not flying the Embraer 145 out of Chicago O’Hare (ORD), Kiersten stays fit and active by cycling dozens of miles a day. She also enjoys spending time nerding-out ­with her girlfriend Natalye and her two cats Loki and Pan – most likely watching her favorite Star Wars movies.

In a class of her own 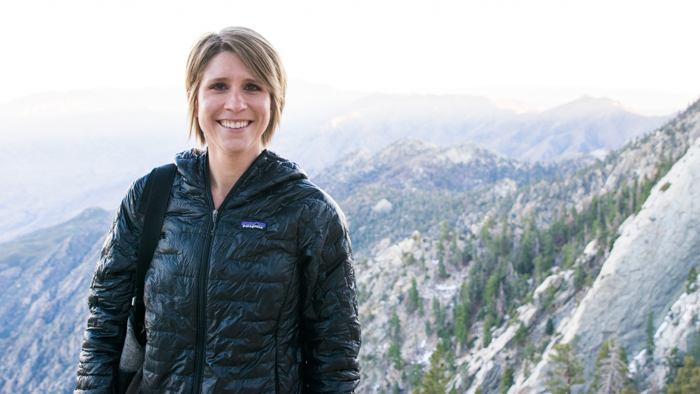 But not even a good light saber fight is more thrilling than instructing new Envoy First Officers.

“I feel so lucky to be a Check Airwoman, because I love teaching,” said Kiersten. “I knew I wanted to pass on what I’ve learned and I feel like I do that well, so why not? Most importantly, I’m trying to teach them professionalism, to have a good attitude and make safety their No. 1 priority.”

During the interview, there were two times where Kiersten was visibly excited; when talking about Star Wars and when asked about her favorite part of her job. Her cheeks lit up, she gazed up and said, “as soon as you get up there. It’s like a movie soundtrack with your favorite song.” That song? Radiohead’s “Idioteque”. 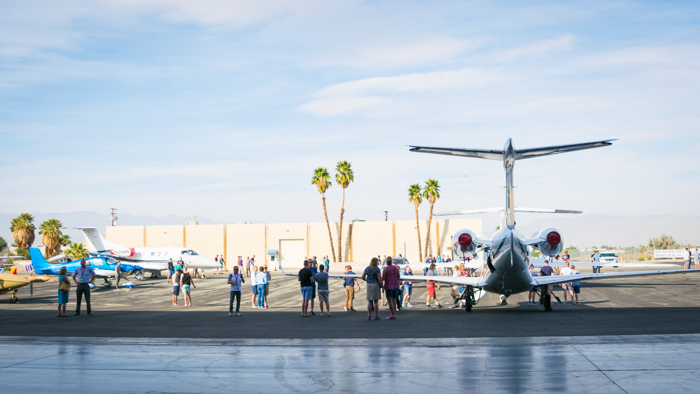 It’s abundantly clear that Kiersten shares the same passion and drive as any other pilot, whether man, woman, straight or gay. After attending the NGPA conference, she realized even more that bringing together pilots and other members of the aviation industry to celebrate their love for flight has the potential to make the flight deck and society at large more inclusive.

Prior to meeting some of the NGPA members, Kiersten wasn’t sure where to find resources in the LGBT pilot community. Now, she has a network of colleagues, friends, allies and advocates across the nation from whom she can learn and share in their efforts to educate the industry. 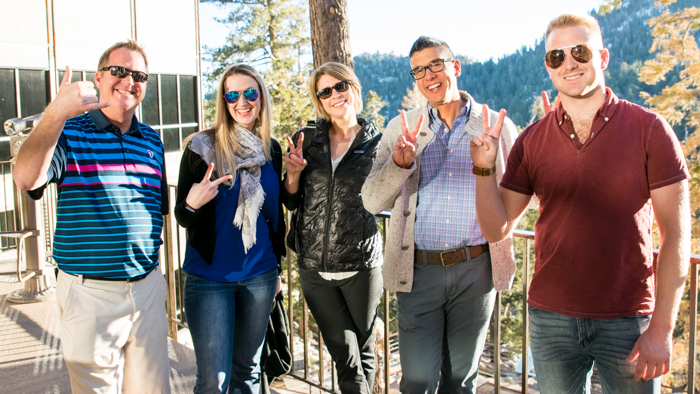 In Palm Springs, Captain Ric Wilson, Envoy’s VP of Flight Operations (pictured above, left), invited Kiersten and the other pilot recruiters out to dinner at the top of Mount San Jacinto. Kiersten said that having someone in Ric’s position actively listening to her hopes and those of other LGBT pilots for a more inclusive flight deck made her proud to be an Envoy pilot.

“I believe in this company, because they believe in me,” said Kiersten. “The only way anything is going to change is if people like Ric take on leadership roles, and set examples of how to promote diversity. I’m sure now, more than ever, that I made the right choice flying for Envoy.”