Life is full of little coincidences, and sometimes the uncanny is so funny you have to share it. Recently, Envoy General Manager Karen Strawder shared a story from Stillwater Regional Airport (SWO) that proves we really do live in a small, small world. 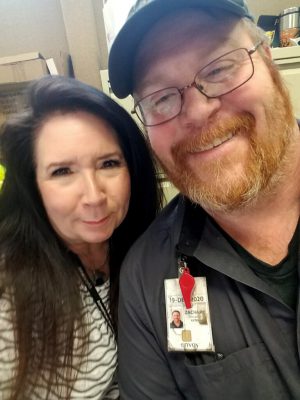 Here in SWO, our ground equipment is serviced by the Ground Service Equipment (GSE) group in Northwest Arkansas Regional Airport. We are lucky to have GSE Crew Chief Zach Goforth take care of our equipment. (Karen and Zach, right)

Last week, when Zach was here, we were discussing where we were from. When I mentioned Houston as being my hometown, he told me that his older brother lived there and had lived there since attending Rice University.

Well, I told him my youngest sister had also attended Rice. He then told me his brother had gotten his engineering degree there and had gone to work for Rockwell and then transitioned to NASA. 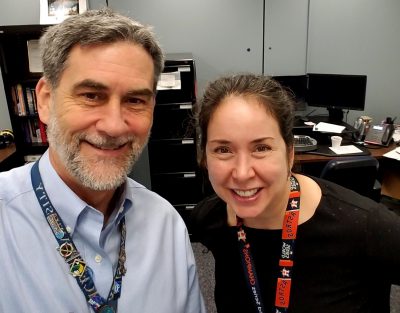 Well, this was too funny for words; my sister had also received her engineering degree at Rice, and also gone to Rockwell and then transitioned to NASA. She had been at NASA in Clearlake, Texas since she graduated from Rice. (Monte Goforth and Brenda Lyons, left)

So we both reached out to our siblings to see if they knew the other, and not only did they know each other, but work together on various projects! How funny that both brothers and sisters work together in two totally different industries and locations!