For flight crews, overnight trips are some of the best perks of the job and give crews the opportunity to bond and explore local sights and sounds. But for one flight crew, overnighting in Puebla, Mexico (PBC), the trip became one to remember.

While crossing a busy downtown street, a car ran a red light and struck Flight Attendant Cara Slusher at approximately 40 mph. “We were all in shock at first – she must have gone seven or eight feet in the air,” said Capt. Josh Vaught, who rushed to administer first aid. “When the ambulance came, paramedics wanted to take her on a three-hour drive to Mexico City. We really had to push back to get her seen at a local hospital.” 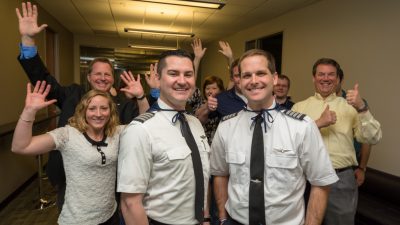 Josh, along with Capt. Scott Deavers accompanied Cara to the hospital and stayed with her all night. “We couldn’t just leave her – it wouldn’t have been right,” added Scott.

Just like an emergency trained for on the flight deck, Scott and Josh divided responsibilities and worked in shifts to keep everything moving through the night with unwavering support. “We were on the phone with American’s Medical team, Envoy Systems Operation Control, Crew Scheduling and more to get on top of this situation,” said Scott. “We’re all crew and we stick together through thick and thin.”

The next challenge came when the hospital refused to discharge Cara without the bill being paid in full. Capt. Deavers used his personal card to cover the expense to get her back to the United States as quickly as possible. Upon return to the U.S., Cara visited another medical facility where medical professionals discovered additional broken bones.

Earlier this month, Capt. Ric Wilson, Vice President, Flight Operations recognized Josh and Scott for their dedication to crewmember safety and for going above and beyond in the face of a medical emergency during an overnight trip. “Your actions helped get Cara back home safely – you should all be proud,” said Ric during a Real American Hero presentation.

So what do the pair think of their hero awards?

“We were just doing what anyone would have done,” said Scott. “Leaving a crewmember behind in a foreign country just wasn’t an option. We did what we could to get her safely back home.” 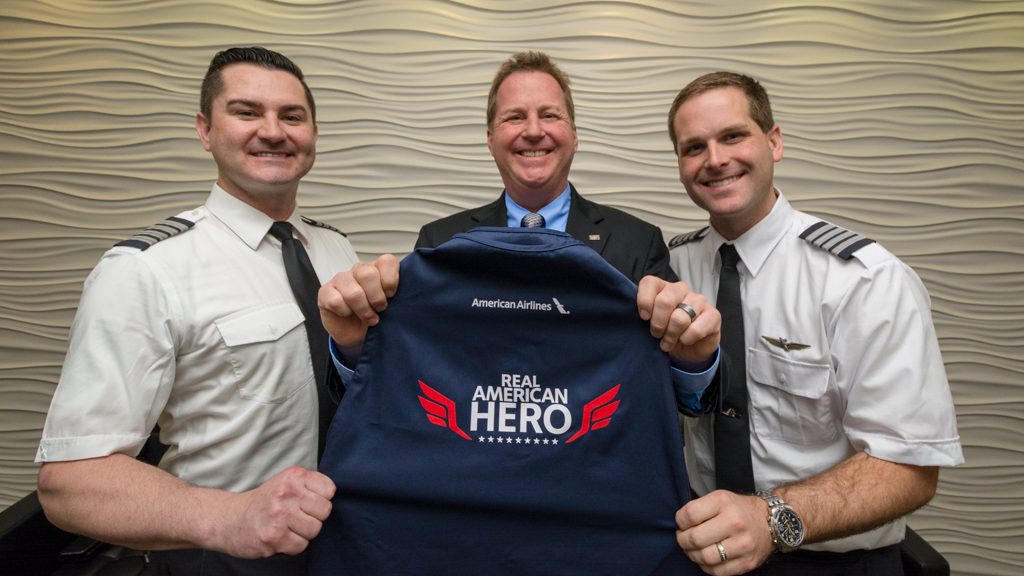 The Real American Hero program is a special recognition program for employees of American and its wholly-owned subsidiaries to recognize those who go above and beyond during a medical emergency at work. Nominations are submitted by coworkers and awards come with a $1,000 cash prize and a very special hero cape.

« For the love of the ramp with Steffond Johnson
Love is in the AAir: Paul and Michelle »