As Mother’s Day approaches this May 13, we’d like to share a story of a mother and son whose passion for the aviation industry led them to fulfill a lifelong dream of working together for Envoy. Corey McGuinness, who recently upgraded to Captain on the Embraer 145 in Miami, followed his mother to Envoy after she became a Flight Attendant in 2011.

Below is a quick Q&A from the McGuinness Duo explaining their separate paths to Envoy, their first trip working together and their passion for aviation. 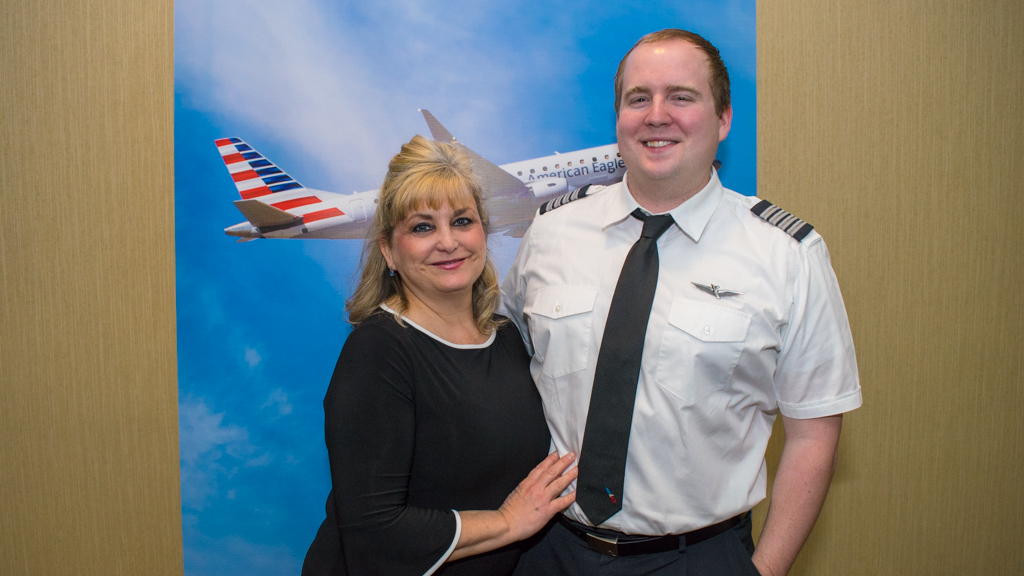 How did your respective careers start, as a pilot and as a flight attendant? Who was first?

Susan: I was first, thanks to my Tante (Aunt) Christa, who worked for American Airlines as a Ticket Agent in San Francisco. I wanted to be just like her. My first plane ride was to Germany to visit my grandmother when I was 11 years old.

After a few jobs in the airline and travel industry, I eventually worked at Austin Travel for 13 years as a Corporate Travel Agent. They had an office in Islip, MacArthur Airport, where I bought Corey his first Captain’s hat when he was around 3 years old.

However, I always wanted to be a flight attendant, so I applied and got hired by American Eagle, now Envoy, in 2011. Corey came to my graduation while he was in his first year at Florida Institute of Technology studying Aviation Management. I always thought he might someday work with me.

Corey: My mom started at Envoy first. I started learning to fly at Florida Institute of Technology in 2010, and finished with a degree in Aviation Management in 2014.

I originally started teaching as a Certified Flight Instructor in 2013, and then joined Envoy in November of 2015. However, I’ve always dreamed of flying, since I was in elementary school.

Did you push each other to work for Envoy?

Susan: I wouldn’t say I pushed him.  Well, maybe just a little.

Corey: My mom absolutely did push me to work for Envoy. I remember going to her Flight Attendant graduation in 2011 at the American Airlines Academy, and I loved it.

All throughout my training in college, I had heard about Envoy, so it grew on me and I couldn’t see myself anywhere else.

Growing up, Corey, did you always know you wanted to be a pilot? How did you help him achieve that dream, Susan?

Corey: I first knew I wanted to fly probably in kindergarten. At my elementary school, we had the rare opportunity every spring to have our own personal air show at our school.

The 106th Air Rescue Wing on Long Island, New York, would fly a helicopter over the field and land allowing every kid to sit up in the pilot’s seat. I knew from that day on I wanted to do nothing else but be a pilot.

Susan: His dad and I took him to visit flight schools.  He got accepted and chose Florida Institute of Technology.

Above: Corey at age four with his sister Kaitlynn.

What was it like to fly together and be a team working to be safe, on time and friendly?

Susan: It was amazing – a dream come true!  I was very proud.

Corey: It was honestly a great experience and very rewarding! How many people can say their mom was the flight attendant on their flight?

I know she had been wanting to fly with me since I started at Envoy, so we finally got the chance to fly together on my first flight after upgrading to Captain.

What’s the best part of working together for the same company?

Susan: I think the best part is getting to see each other more.

Corey: There’s a lot, actually. My mom has given me so much insightful knowledge and tips on how to bid, commute, and overall how to navigate the airline industry. It also helps that we have the same flight privileges and can see each other a lot more often. 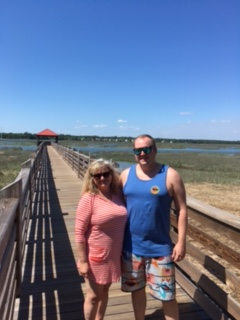 With your flight privileges, do you two get to take trips together often?

Susan: We went to Disney’s Aulani in Hawaii. It was a great vacation! I would like to go to Germany with my kids to show them where their grandmother came from.

Corey: We do! I was listed on her travel privileges all through college until I joined Envoy, and loved having the ability to go anywhere with my family. Getting to fly First Class to Hawaii together was the most memorable trip so far. We’re hoping a trip to Germany is in the near future!

Will you all try to bid for the same base in the future, so you can possibly work more flights together?

Susan: Maybe in the future, or we can pick up overtime together.

Corey: I know during the summer I will try to spend some time at home in New York. And I’m positive she will bid for Miami trips, especially during the winter months!

What are your plans for Mother’s Day?

Corey: We’ll be heading to Hilton Head, South Carolina for a family vacation but also to celebrate my youngest sister’s graduation from college.