If you know anything about Envoy, you’ll know that we’re working hard to grow our fleet and increase our ground operations all across the system. And with a growing fleet of Embraer 175 (E175) aircraft – 10 already on the way starting this year and 15 more just announced to begin arriving in 2019 – we’re beginning to see the fruits of that effort.

And one of the ways we’re supporting our E175 operation is with our newest maintenance base in Little Rock, Arkansas (LIT). 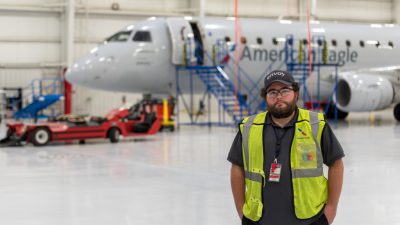 “We opened back in October 2016; it’s been great to see everything come together,” said Seth Waltson, LIT Base Supervisor. “The first group of guys who were here when we started have stepped up and helped us get to where we are now. We’re all ready for it to get even bigger as the E175 fleet grows.”

“I’ve been here since we opened; I was on the day shift but now I’m glad to be back on nights,” added Charles Robert Philips, LIT Aircraft Maintenance Technician. “When we started, we worked from a room that we shared with the airport. We performed most of the work outside, and the original crew really bonded over the shared experience of starting out – I even built the shelves in the Stores room!”

From humble beginnings, our LIT base now handles about three overnight E175 aircraft every night, and the maintenance base brings more than 60 skilled jobs to the local area. Many of those jobs are thanks to the support of partner schools such as National Aviation Academy (NAA), where students learn to get their Airframe & Powerplant (A&P) license. 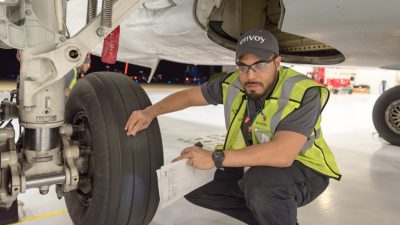 “I heard about Envoy through a National Aviation Academy career fair,” said Jesus “Chewy” Thompson-Sanchez, LIT Aircraft Maintenance Technician. “A friend of mine is based in DFW as a mechanic for Envoy and said great things. I even talked a friend from NAA into coming to Little Rock, too! There’s about five or six NAA graduates here now. With it being a new base with a new fleet, everyone is learning at the same pace and growing at the same time. My goal is to continue to grow with the base and with the company.”

Another NAA graduate-turned-LIT mechanic, Cylin Sneed added “I’ve been here just over a year and I’m putting in for a for a crew chief position soon. I’m already learning some of the additional responsibilities, but the hands-on part is the best. We’re a solid team and everyone shares knowledge to get the job done.”

Personal, professional and organizational growth is what it’s all about.

“Adding the DCA flight earlier this year was big for everyone here,” added Seth. “That brought one more overnight to the station, and more work to do. It’s been great to see our operation grow, and everyone along with it.”

« 60 second interview: Brian Thomas
Love is in the AAir: Terry and Nicole Butler »