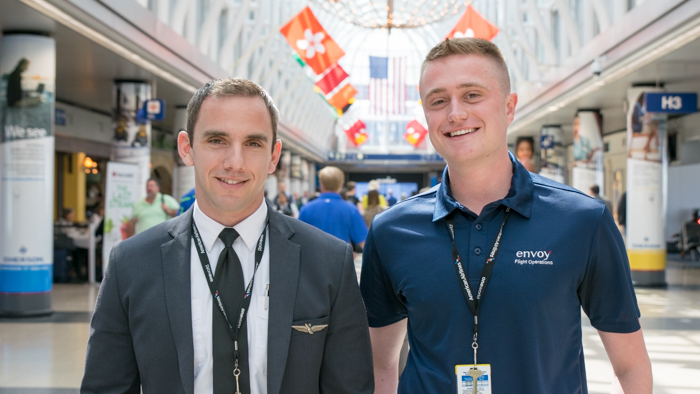 Like many young pilots eager to fly for a regional airline, Tony Petraglia researched his choices in order to find the best job suited for him. However, it wasn’t easy for him, having no family members or even close friends who have traversed his same path.

That’s why his connection to a fellow Purdue University alumnus, Envoy Captain Scott Wasulko, has been invaluable to his career path since his freshman year in college, on through graduate school and now as an Envoy First Officer. Whether it was a question about flight training or the inside scoop on the hiring process to a regional airline, Scott was there for Tony’s questions day or night.

“Sometimes I would forget what time it was and end up calling him really late,” said Tony. “But he would always pick up and answer any question I had. The application process for an airline can be a little bit confusing, and Scott could always make it more understandable.”

For Scott, his mentoring skills came naturally having experienced the whole process and gone through the twists and turns of applying to the airlines.

“In my experience, pilots do best with hands-on learning,” said Scott. “Tony was so eager – all he needed was just a little nudge in the right direction and a good example to follow.”

“The right choice for you.” 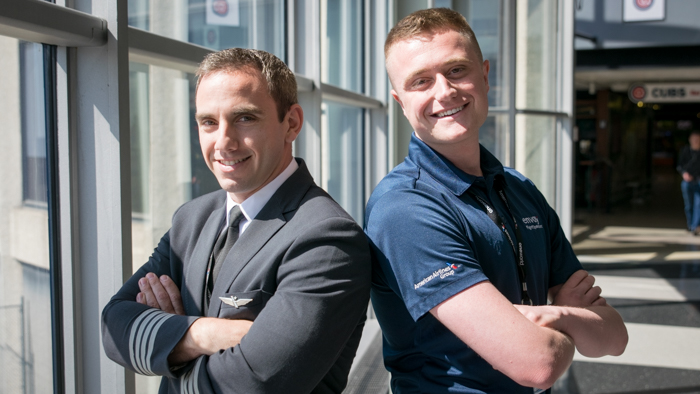 When Tony began asking for recommendations for regional airlines to begin his career, Scott said that he tried his best to be unbiased.

“Not every pilot is the same,” he said. “We all want and need different things that work best for our life. I just told Tony to make the best choice for him.”

Tony said he was looking for company benefits that would increase his quality of life, such as a decent salary, exceptional training and a fleet of aircraft he would be excited to fly. He found all of these aspects at Envoy, plus a flow-through program to American Airlines that guaranteed him a job at a major airline without any additional interview.

“Some other airlines have the flow-through, but Envoy’s is more guaranteed and more solidified,” said Tony. “Ultimately, it came down to bases that were more spread out and in better cities. But I also liked the vibe of Envoy with its established pilots who have a lot of knowledge to share.” 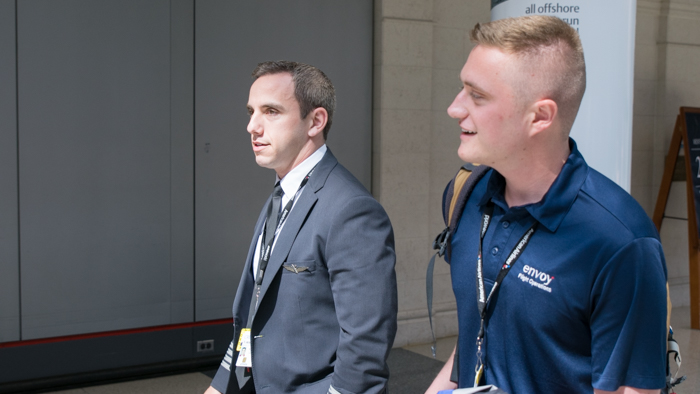 Although Tony is excited about his future career with American, he’s enjoying his journey along the way and looks forward to mentoring others just as Scott did for him. He’s still involved with Purdue’s flight program and has taken every opportunity to pay his good fortune forward.

On the other end of the journey, Scott will soon be arriving at American and looking for a little help of his own. With a daughter on the way, Scott and his family will welcome any type of advice to help navigate their next stage in life.

“The tables will have turned and I’ll be back in the right seat, but I’m actually looking forward to it,” said Scott. “As a pilot, I’m always looking to learn more and improve my skills. It will be great to be the new guy and learn from the Captains at American.”

Even though their careers have progressed and Tony has found his airline of choice, he and Scott plan to stay in touch. They also said that they hope other young pilots can get the advice and mentoring to help them find the right airline for them.

“If you’re teamed up with a Captain, don’t be afraid to pick up the phone and ask questions,” said Scott.

Tony jumped in, “Yeah, pilots love to talk. And who best to learn from than someone who has been there?”