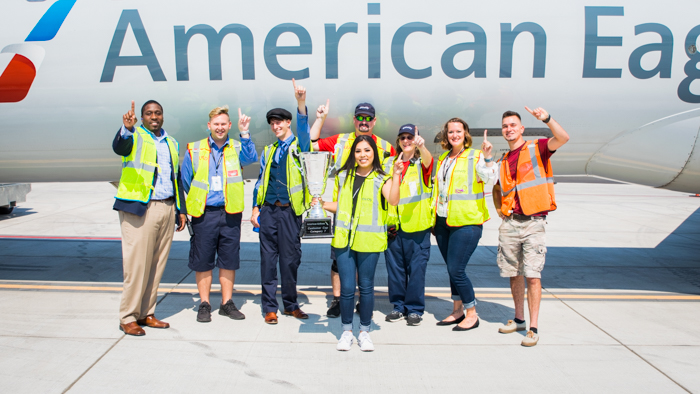 The giant, silver, and shining Customer Cup proudly displayed in the middle of the conference table served as the centerpiece for the Medford team’s celebration meal. Remove the airport setting, the office chairs, and the security badges, and you’d feel like you were at Sunday Dinner with a large family of ten.

With each person taking turns to crack jokes, chime in, or to dole out praise, you’d almost expect Grandma to show up – apple pie in hand – and tell her famous story for the thousandth time to the tune of huge laughter from the table. But that’s just the feeling you get when spending time with the Envoy team in Medford, Oregon– they are a family strongly bonded through their experiences, common goals, and love for one another. 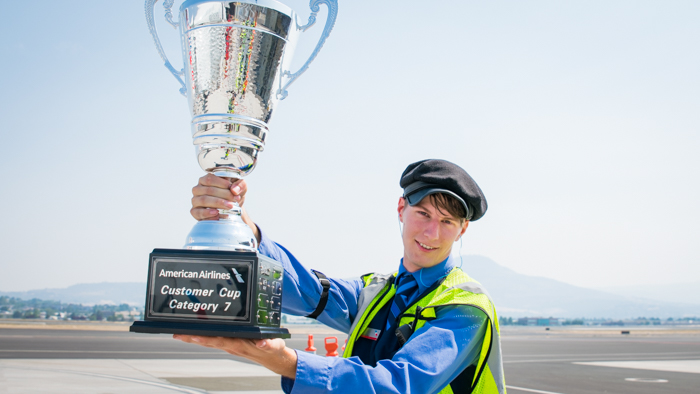 First-time winners of the American Airlines Customer Cup, the Medford team is small, with only ten employees and two turns per day, but they have set the bar high since opening operations in June 2017 at Rogue Valley International-Medford Airport. In all five categories of metrics that determine Customer Cup winners – like on-time departures, baggage handling and customer feedback – the Medford team exceeded each one of their goals by large margins.

“A win within a station’s first year is impressive and is a remarkable achievement,” said Timarty Stitt, Envoy Regional Managing Director. “I’m most impressed with this group’s camaraderie, it’s because of that I’m sure I will be back for another cup celebration in the near future!” 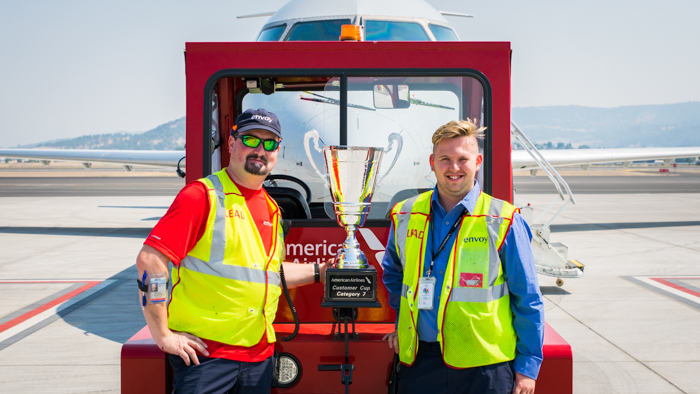 At the heart of the Medford team are six agents who call themselves the Dallas Six after the city where they trained together and began forming the strong bond that holds the team together. They are responsible for creating the culture, training new employees, and holding the team accountable in order to achieve goals like outstanding customer service.

At the helm of the Medford ship is General Manager, and materfamilias, Nicole Hills whose leadership style is friendly, firm and inspirational. With each of her agents, she treats them like equals with the respect you’d expect from a great leader.

“It’s my job to keep them engaged and motivated, but as a group they take initiative really well,” said Nicole. “It took us some time to get to where we are right now, but they put in the work and the hustle. That’s what’s important.”

Birds of a feather work together 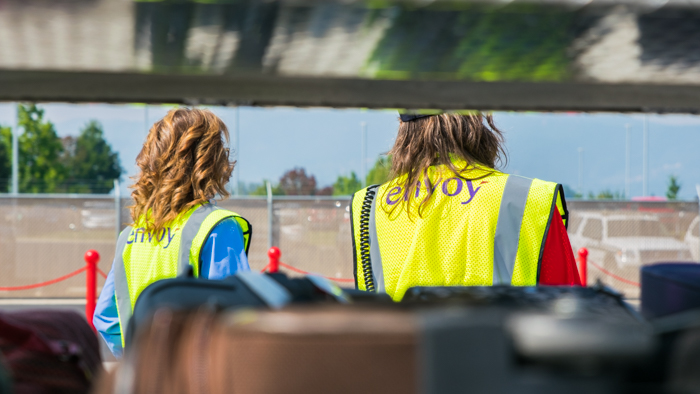 When asked about the personal qualities that make the Medford team special, the agents came up with words like quirky, jokesters, laid-back and that their close-knit cohesion was palpable. For instance, Lead Agent Erin Alexander bakes a cake for everyone’s birthday out of love and just for fun.

Newly acquired Customer Care Agent Dave Hansen came by choice from another airline at the Medford Airport to be part of the team of “good people,” he said.

“I’d see them having fun while working hard, and I just wanted be a part of that,” said Dave. “Everyone does a little bit of everything in their jobs, are well versed in procedures, continuously deliver premium service and continue the small-town values that work so well at a small airport. That’s what helped us win the cup.”

As group of agents they are formidable. As a family they are unstoppable.

“It’s amazing that each person wants to succeed,” said Lead Agent Erin. “It’s not just a job, it’s a family, and we all want to be the best.”

Click here to view all the photos from Medford’s celebration