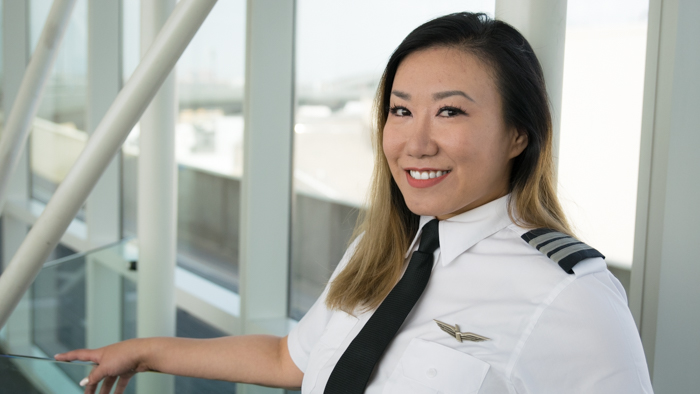 A parent’s love for their child is stronger than any bond. In the case of First Officer Dana Mericle’s parents, despite their trepidations of missing their daughter and watching her leave China for the U.S., they sold their family home in Dalian, China to help finance Dana’s flight training.

It’s no secret that flight training is expensive, but some determination, passion and proper planning can make the goal of becoming an airline pilot attainable. Dana is the perfect example of reaching that goal, and with the sacrifice of her parents, she was gifted the opportunity that she was born to conquer.

It’s not just a job, it’s a lifestyle 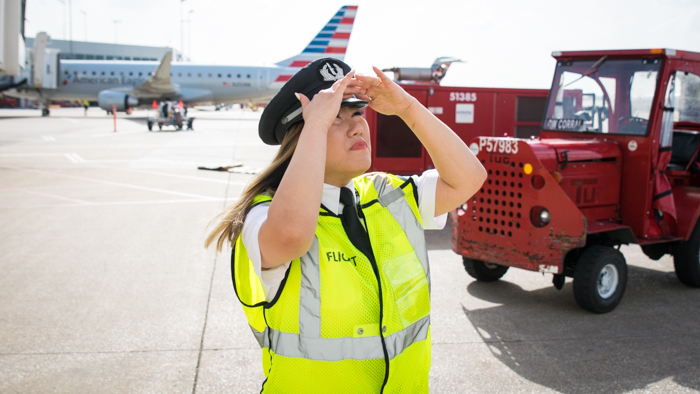 Dana isn’t your prototypical pilot. She didn’t grow up with a family of aviators or go to a four-year university to study aviation.

Her first experience in the airline industry started with a 10-year career as a flight attendant for a major international airline. There she excelled as a customer service professional and learned to love the lifestyle of a flight attendant.

But in her line of work, Dana thought she could only go so far in advancing her stature with the company. Not until she met a Captain with the airline did she begin thinking about a pilot career. 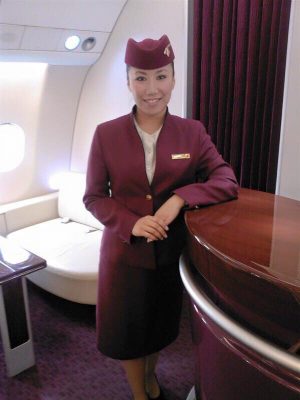 Knowing her excellent work ethic and attention to detail, he urged her to make the jump to the flight deck. But at 30 years old, Dana put her aviation career on hold and moved back to China.

“After waiting anxiously for what was next in my life, I started missing flying and the lifestyle I had,” said Dana. “I thought back to my conversation with the Captain, and began to seriously consider becoming a pilot, so I began saving money for flight training.”

Her parents thought she was “crazy” but nothing could stop them from supporting their only child. They moved into an apartment, sold their home, and used the money from the sale to finance Dana’s newfound dream. 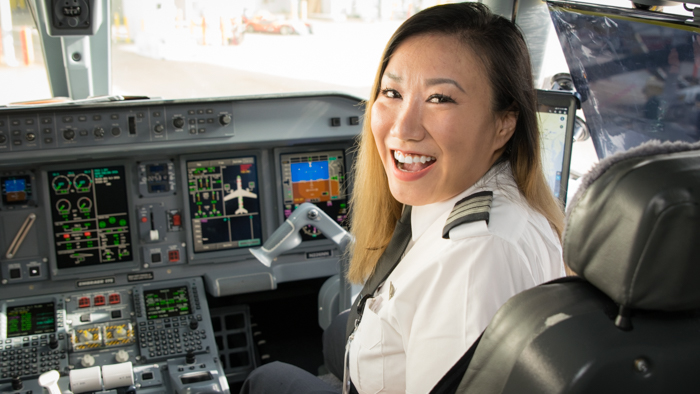 In 2014, Dana began flight training at L3 Airline Academy in Florida, and soon became a Certified Flight Instructor for them. With her genuine, no-nonsense attitude, Dana quickly earned the reputation as a stern but fair instructor.

Not that she didn’t enjoy training up-and-coming pilots, but after a while, she was ready to advance her career and take on the next challenge as a First Officer at a regional airline. Without batting an eye, the choice was “obvious” for Dana – she chose Envoy, and now flies the Embraer 175 based out of Chicago O’Hare.

With Envoy, and its predecessor American Eagle, having a 30-plus-year history as one of the world’s best regional airlines, that clout and respect meant a lot to Dana. Plus, the fact that Envoy is growing its Embraer 175 fleet really made an impression on Dana who said she sees it as Envoy “investing in the future of the company.”

“The flow through to American Airlines is wonderful,” said Dana. “There’s no reason not to choose Envoy when you talk about flow. There’s a built-in guarantee that you can keep in your pocket.” 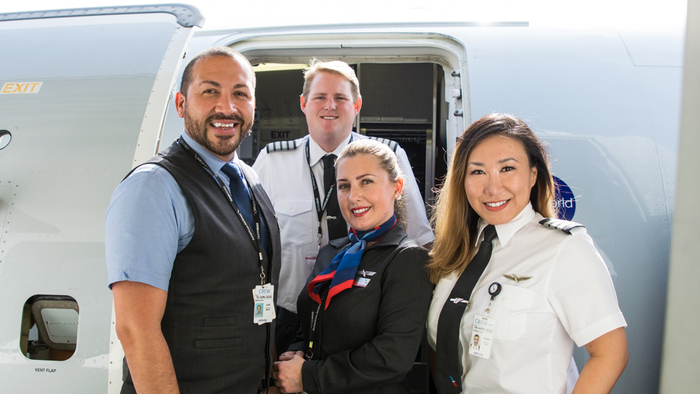 In a pilot’s airline career there are markers constantly progressing them forward; CFI to First Officer, to reserve pilot, to line pilot, to Captain, to Check Airman, so on and so on. This perpetual progression is what intrigued Dana the most, and a huge reason why she chose her career.

That isn’t to say that Dana is in a rush to retirement, she’s enjoying every moment as a regional airline pilot. Whether she’s on the flight deck gazing upon a beautiful sunrise – “eating with her eyes” as she put it – or taking time to acknowledge the main operative of bringing people to their desired destinations, Dana is enamored with her job. 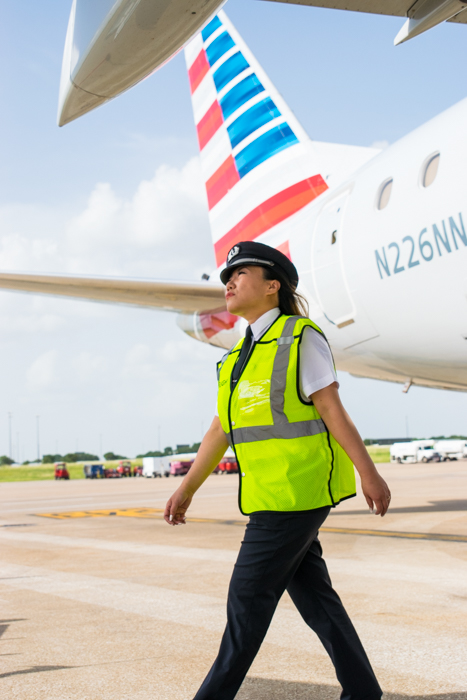 always curious as to why people are travelling on my plane that day,” said Dana. “You never know where they need to go; meeting a loved one, visiting a sick family member, or on a trip to fulfill a lifelong dream. So as a pilot, you make these things possible for people. Behind the flight deck door, everyone has a story.”

Even though Dana’s journey to the airlines was unique, she still wants to share advice with young people who have a chance to follow a direct path to a pilot career. First off, she said, you can’t be afraid to commit to the journey.

Every class you take or every flight lesson, “make it count,” she said. However, as Dana learned through experience, it’s also essential for young people to be reasonable about what they can achieve.

Most importantly, she said it’s necessary for young pilots to research schools, licenses, jobs and airlines in order to be prepared to make the best decision for themselves. Ultimately, Dana believes that they must be grateful for the opportunity to be a pilot, and be confident in their abilities that they can achieve their goals.

Be grateful for what you have 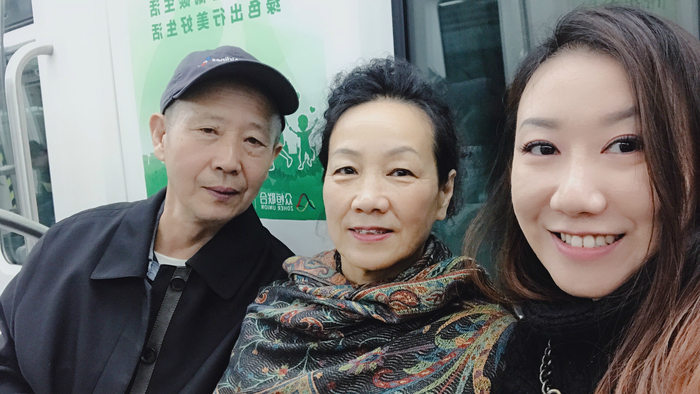 Dana with her parents in China.

Dana said that the biggest perk of her job is the ability for her and her family to travel for free on the American Airlines network. Dana said that it’s a small gift she can give to her parents in return for the sacrifice they made for her.

Dana tries to fly to China every month to spend time with her parents.

“Every time I go back, my dad asks me to make pancakes, because they miss my cooking,” said Dana with tears in her eyes. “It’s the least I can do in return for everything they gave to me so I could follow my dreams.”

As she wiped her eyes, she laughed and conceded that she often gets teared up when she’s happy. Given her long journey and gratefulness for her life as an airline pilot, Dana said that her first takeoff as an Envoy pilot was an emotional one.

“We were climbing up, I brought up the landing gear, and I asked my Captain, can I cry? I need to cry,” she said. “I told him not to worry because they are happy tears. I’m just so happy and so grateful to be where I am.”