Envoy recruiters were present all week to connect with the thousands of aviation enthusiasts who visit Oshkosh and attended the mid-week Aviation Job Fair, hosted by the EAA. 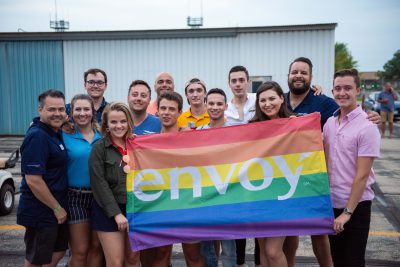 On Friday, Envoy sponsored a barbecue for the National Gay Pilots Association (NGPA). In attendance, was the Director Air Operations Recruitment, Andrew La Susa, as well as other members of the Envoy team.

“There’s not much better than good food, new and old friends surrounded by the world’s largest air show,” said Manager of Envoy Pilot Recruitment Outreach Martin Rottler. “Support for aviation diversity inclusion events such as the NGPA AirVenture Hangar BBQ are an important part of Envoy’s efforts to make our industry a more welcoming place for all, including allies and supporters.”