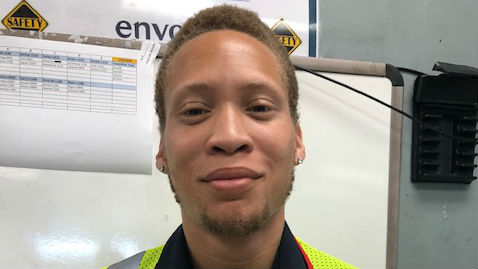 “Better” by Khalid… That was the song he was thinking about when 23-year old crew chief, Isaiah Foster, was videotaped by passenger Suzanne Durham while he was dancing on the tarmac at Nashville International Airport.  “I’m in love with Dominique and I was thinking about her when I was dancing,” said Isaiah, referring to the fact that he recently formalized his relationship with the lady with whom he had been friends for a year. 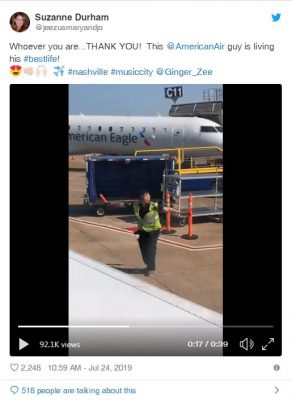 His dream to become a pilot started while in High School with a behind the scenes tour of the airport. They were taken to the tower and he fell in love with aviation. He hasn’t started flight lessons, but he’s making a plan to get there.

Sylvester Holmes, Envoy’s general manager in Nashville, shared that Foster is “one of those quiet leaders who is very dedicated to his job. Employees can count on him to complete the task as he is a ‘go to guy’ in high demand in our temporary duty assignments program. He’s sought after by other general managers and the consistent feedback is that he’s a pleasure to work with.  He represents Nashville well.”

His supervisor says Foster is “one of our most energetic people.”  Needless to say he is, as this is the third time that he’s been videotaped dancing on the tarmac.  “The first time it went viral was in Moline, Ill.. It was freezing cold at 20 below and the wind was hitting my face.  I just felt like dancing,” said Isaiah.  “The second time was in Houston and I was dancing to ‘Jump on it’”, referring to a Sugarhill Gang Apache song he was thinking about. Here is the first video that became viral when he was in Moline.

Isaiah says dancing makes him happy and gives him great peace. He’s not a professional dancer, but he says that he and his brother always used to have dance offs and it’s something he enjoyed.

His most recent dance went viral and it was picked up by the online version of Good Morning America and other media outlets.  His peers in Nashville have been supportive and complimentary of his most recent “dancing episode” in social media and appreciate the attention this has brought to the Nashville station and the team. He said his colleagues even suggested a visit to Ellen Degeneres’ show. Of all the attention, Isaiah said with a smile, “It feels good.”