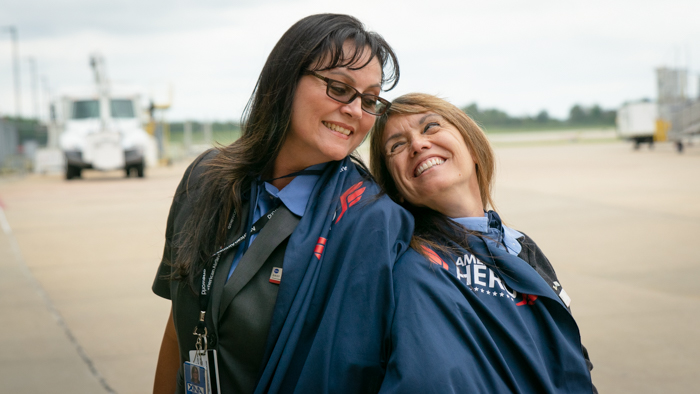 At Northwest Arkansas Regional Airport (XNA), two such heroes sprang into action when they were alerted that a customer was experiencing a seizure in the men’s restroom. The two Envoy agents, working the ticket at the time, counter suddenly rushed to help the man in distress.

When they entered the restroom, Customer Service Agents Daisy Agosto and Lilly Soto (shown above, left to right) found the customer convulsing inside the stall. Daisy mustered enough strength and adrenaline to force open the locked stall to get to him.

While she attempted to stabilize the customer, Lilly retrieved First Class passenger blankets from their breakroom, and used them to pad the tile floor and wall. Both Lilly and Daisy stayed with the man until he gained consciousness and airport police arrived on the scene.

Sargeant David Ibarra of the XNA Police, who was the first to arrive, commended the women for their heroic efforts.

“It is an honor to work with consummate professionals,” he said. “I have no doubt that the actions of Daisy Agosto and Lilly Soto prevented this man from serious injury or the loss of his life.” 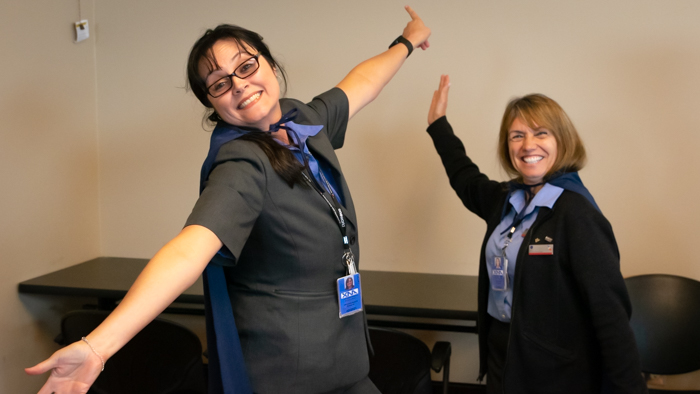 For their heroic efforts, Lilly and Daisy received the American Airlines Real American Hero award, which recognizes employees for their life-saving efforts. Lilly and Daisy will also receive a one-thousand dollar cash prize and a very special hero cape.

“It feels good to be called a hero,” said Daisy. “If we weren’t there, I don’t know what would have happened to him. Even though I don’t know him, I have family like him who suffer from seizures. So, I only did what I would do for anyone in my family.”

Both Lilly and Daisy, who are second-cousins, have experience taking care of seizure victims in their family. For Lilly, her experience with the harrowing ordeal started at eight years old with her mother who suffers from epilepsy.

“When I saw that he was seizing, I didn’t really think about what to do – I just did it,” said Lilly. “I’ve seen this a lot in my life, so I just knew what to do.” 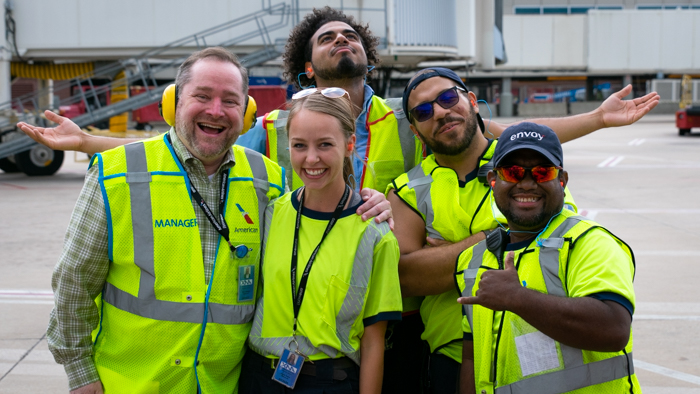 General Manager Steven Shatsky with his team of Customer Service Agents at XNA.

The agents’ quick thinking and decisive actions are definitely innate to them, but Envoy General Manager Steven Shatsky would also like to think that their preparedness played a part in their successful efforts.

“We’ve had ten Real American Heroes here at XNA,” said Steven, addressing his employees at his safety briefing. “How do we find ourselves in the right positions and spring into action to prevent dangers? Because we’re prepared and work as a team.”

The teamwork of Daisy and Lilly certainly handled the situation, which Daisy said is something that could happen at any time in their line of work.

“The most important part of our job is safety,” she said. “You never know when an emergency will happen. You don’t plan on them, you just have to always be thinking about safety.”

All in a day’s work 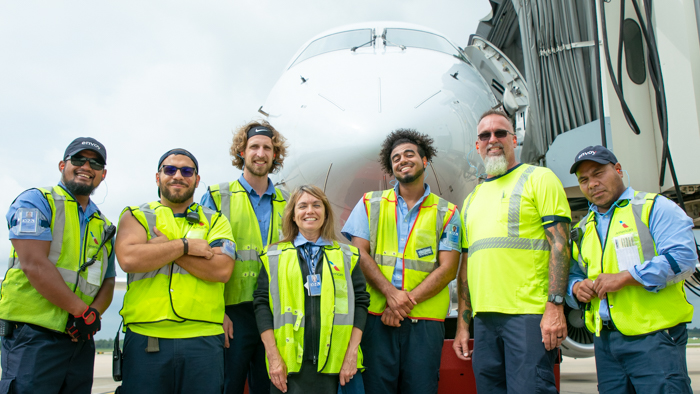 Lilly Soto (fourth from left) poses with a team of Customer Services Agents on the ramp at XNA.

For Lilly, who said she “wears her heart on her sleeve,” the fact that she was able to help someone is an important part of her job at XNA. If something doesn’t go quite right for a customer, Lilly does everything she can to help make their day a little better.

“If there’s a need, I’ll help,” said Lilly. “Even if it’s just a weather delay, I want to help our customers. Sometimes there’s nothing I can do, and that breaks my heart that I can’t do magic and make the rain go away.”

It wasn’t magic that they performed on that crucial morning to save the customer’s life, but it was heroic.