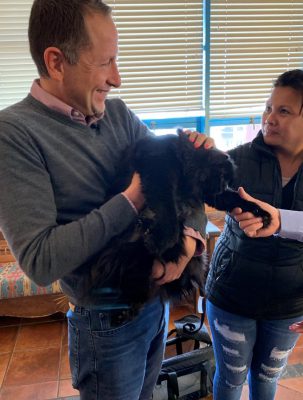 More than five years ago, Sasha the cat went missing from his home in Portland Oregon. And last week, Sasha turned up more than 1,200 miles away in Santa Fe, New Mexico! American offered assistance to help reunite the customer with his long-lost cat, and the Envoy team in SAF was there when it happened.

In a statement, American said, “At American Airlines, our business is about caring for people on life’s journey and connecting them with their loved ones. When we heard Sasha had been found so far from home, after so many years away from his family, we were honored to be in a position to get him back to his family. We’re glad to have provided a happy ending to Sasha’s long journey.”

In an interview with local media, Sasha’s owner, Viktor Usov said “I couldn’t believe it! We thought the worst, but when we received the call, we were so thankful Sasha was alive and well. I guess I wanna think he was on a great American adventure!”

Sasha was found thanks to the hard work of the Santa Fe Animal Shelter, which identified the cat via an embedded microchip.