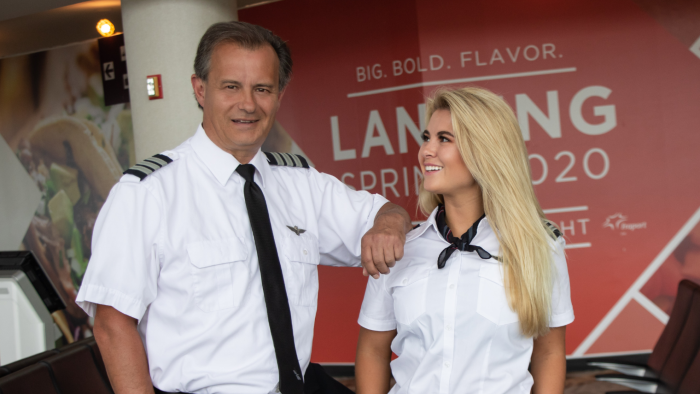 Gabriella’s earliest memories are filled with the sights and sounds of airports and the oddly sweet smell of jet fuel. Along with the feeling of care, excitement and wisdom from her father.

A third-generation pilot, Gabriella Lindskoug was destined to become an Envoy First Officer. Her grandfather Rune Lindskog was a Swedish Royal Air Force pilot, and her father, a Swedish native, also served in the Swedish military before changing course to South Carolina to become an airline pilot.

With just a suitcase in his hand, Ulf Lindskog said he knew very little English, but found a job as a flight instructor. Eventually in the early 1990s, Ulf was hired by American Eagle, now Envoy, as a First Officer.

Like father like daughter, Gabriella, 23, is following her dad’s footsteps from Envoy and eventually to American Airlines, where Ulf is now flying Boeing 777s. Let’s hear more from the duo as they talk about their love for flying and what Father’s day means to them.

A way of life

Ulf, When was your first flight, and when did you know you wanted to become an airline pilot?

I can remember thinking I really wanted to be a pilot. I once told an older man at the base that I was going to be an American Airlines pilot. He laughed and said, “that was one heck of a goal for a kid from northern Sweden.”

Ella, when was your discovery flight and how did you earn your hours to become an Envoy First Officer?

My first flight, like many people, was in a Cessna 172 when I was a senior in high school. I always knew I wanted to be a pilot, and luckily, I had an amazing aviation school, Middle Tennessee State University (MTSU), right in my backyard.

There I got my Aeronautical Science degree and went through flight school, then worked as a Flight Instructor to earn my hours. I also earned a fair number of hours by competing in the Air Race Classic for three consecutive years.

The competition requires pilots to race across America covering thousands of miles in four days!

Ella, why did you want to become an airline pilot?

Aviation has always been in my life. I grew up listening to my grandfather and father talk about flying.

Although I was only a little kid at the time, I became instantly hooked on anything that had to do with airplanes.This fascination was probably because aviation was in my blood.

There’s nothing like being up in the sky seeing the world from such a different perspective. It’s truly the best office on earth. I could not imagine a better job and I have some of the best pilots to look up to.

Ulf, what is your favorite part about being a father?

I couldn’t be luckier to have Ella as a daughter. Watching her learn to ride and then show horses has been one of her greatest accomplishments.

Standing helplessly by while your little eight-year-old girl climbs onto a 1,300-pound, all-muscle horse is terrifying. Seeing her learn how to canter and jump the horse over tall fences and hedges has been absolutely amazing.

I remember taking her to school and looking in the rearview mirror at a pretty little girl. I would ask her if she was ready for her test, and she would say, “Don’t worry, dad! I got this.”

Now, I look back in the mirror and see a beautiful, smart airline pilot off to a trip. I ask her if she’s got everything and she says, “Don’t worry, dad! I got this.”

Ella, how would you describe your relationship as pilot father and daughter?

It’s definitely great to have family in the industry. He’s been through all the training I have gone through, and is always able to give me a pep talk when I needed it.

Now, I can appreciate everything he has experienced. I see his life differently now that I am an adult and an airline pilot following in his footsteps.

Ella, what does Father’s Day mean to you?

Father’s Day is a day I get to celebrate this incredible man — that’s my dad. Seeing how hard he’s worked and what he’s accomplished just amazes me.

He had a goal of flying for American Airlines and did it. While every Father’s Day looks different each year with the airline schedule, it doesn’t matter what day it is, I just celebrate the fact that he’s the best dad out there!

To all the amazing dads out there — Happy Father’s Day, from all of us at Envoy!