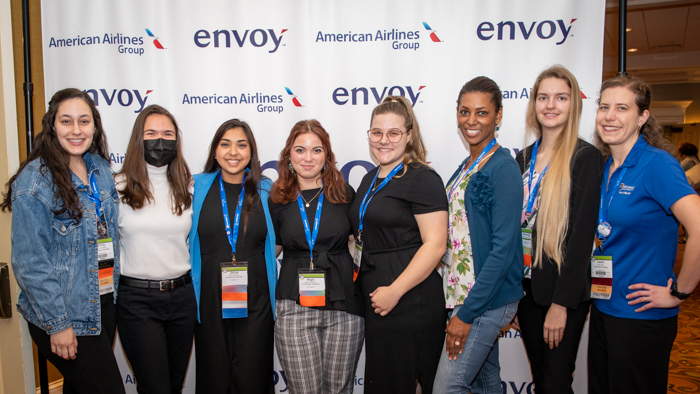 “Partnering with WAI for these scholarships makes complete sense for Envoy,” says Envoy Vice President of Flight Operations, Captain Ric Wilson. “Our industry relies on a broad range of skills, talent and knowledge to make it work. I’m proud of people like Amber and Arden who plan to make aviation their career.”

Let’s hear from some amazing women we met during this year’s conference, and learn more about their current place in aviation, their inspirations and why organizational support is important to them. In our first of three installments, we’ll speak to one of our very own Cadet pilots.

Sarah used to underestimate herself. That was until she flew an aircraft.

“The first time I grabbed the airplane’s controls, I thought ‘Dang! Why haven’t I’ve been doing this all along?” Sarah said.

For three years, Sarah sold insurance and held a salary position. She thought she didn’t have what it took to fly planes, even though it’s all she wanted to do since she was a little girl.

Her father was an Air Force pilot and flew Boeing 777s for American Airlines, so the inspiration was there, but the fact that she was a woman made her apprehensive.

“Once I realized that I have so much control flying an aircraft, and that I could accomplish so much with that passion, it gave me confidence that I never had before,” said Sarah.

With the support of her parents, Sarah said that she took a “scary” head-first dive into her new career path. Once she reached 1,000 hours flying in Connecticut and Florida, she began looking at airlines for a job.

“I chose the Envoy Cadet Program because of how transparent the whole process was,” Sarah said. “I felt that I could be myself, and even though I came from a non-traditional path to get there, they didn’t treat me any different. I always felt like I was part of the team. Plus, I always wanted to fly for American, so this gives me the best chance to make that dream reality.”

With a plan in place for her career, Sarah wanted to spend time at the WAI conference to gain wisdom from the women who have been in her shoes before.

“I know other women pilots through work and it’s nice to have that camaraderie since there are so few of us, but being here at the conference is so exciting because I’ve never seen so many of us,” Sarah said. “It’s so encouraging to learn about work-family balance from real pilots, and hear their stories that sound so much like mine.”

With that in mind, Sarah is eager to share some of her advice for women and young girls who want to create their own career in aviation.

“You have to take the time to be present and enjoy the moment,” she said. “Also, don’t be afraid to ask questions no matter how silly or small they might seem. You never know what wisdom is waiting for you.”