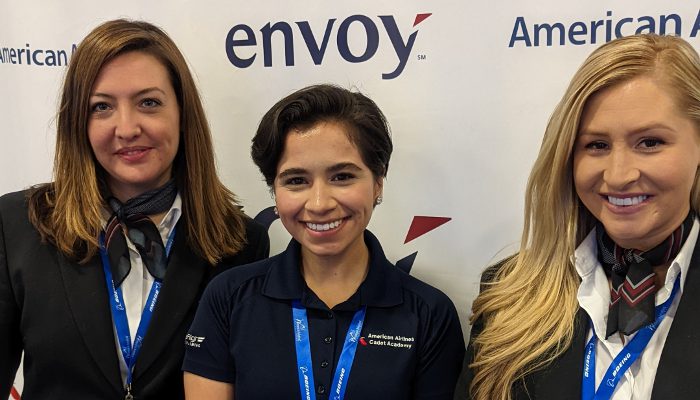 Let’s hear from some amazing women we met during this year’s conference, and learn more about their current place in aviation, their inspirations and why organizational support is important to them. In our final installment, we’ll speak to a Cadet from the American Airlines Cadet Academy and an experienced air racer.

Daisy Soto thinks miles ahead. She could continue to gain all of her hours at Coast Flight Training in Florida soaring through the blue skies over sandy beaches, but that’s not realistic.

“If I want to be a better pilot, I have to get experience with every kind of weather condition,” Daisy said. “When I’m flying for an airline, the weather isn’t always going to be perfect, so that’s why I want to fly in the northwest.”

Soon, Daisy said she will be on her way to Washington where she will work as a Certified Flight Instructor. Quite the change of scenery indeed.

As an AA Cadet, Daisy has her choice of which regional airline under the American Airlines Group umbrella at which she would like to begin her career. Not surprisingly, Daisy said she is strongly considering Envoy.

“Envoy has such an awesome fleet of aircraft and they fly some of the best routes in the industry, like to Mexico!” Daisy said. “As a Latina, I would feel great working for a company like Envoy that has such a diverse work environment.”

For now, Daisy will continue to focus on gaining enough hours to become a First Officer, but at the moment, she was just excited to be at the conference.

“When I told people I wanted to be a pilot, they thought I was crazy because they thought it was just for men,” Daisy said. “But being at this conference, there is the support of so many women who mentor and inspire pilots like me.”

That brings us to our next pilot who uses her platform to inspire young women to follow their dreams of flying.

Donna Hariss is not an airline pilot, and never will be. Yet, she’s inspired so many women that have gone on to fly commercial jets.

It all starts on a 2,400-nautical mile, transcontinental, all-woman air race called the Air Race Classic. In teams of three, women and girls —aged anywhere from 16 to 93 years old (a new record)— fly Cessnas and Pipers in a four-day air race.

“The friendships made by these amazing women are the reasons why we race,” Donna said. “At the WAI conference, that same type of fun energy flows all around.”

In the exhibit hall, Donna said she’s run into so many familiar faces who have raced with her in the past.

“I love to see their excitement again when we catch up,” Donna said. “Some of these women started racing little planes when they were young, and now they’re in college or at an airline. It’s like seeing my adopted daughters again, and it makes me proud to see their success.”

That’s what this conference is all about — women inspiring future aviators in any way possible, no matter their position in the industry. From Captain to Cadet, general aviation to commercial; the future of women in aviation continues to soar.