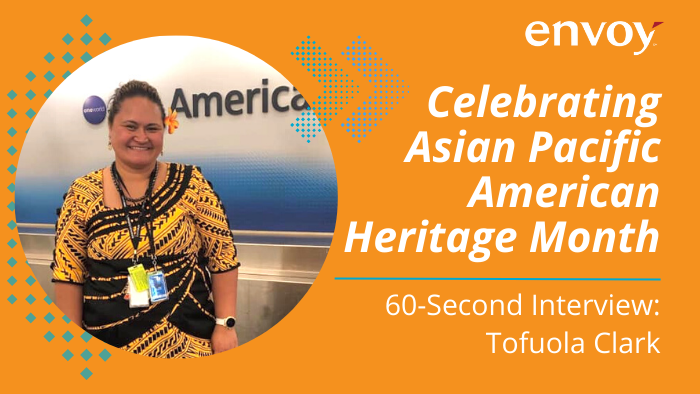 This May, we want to celebrate Asian/Pacific American Heritage Month and the many generations fortifying our nation’s historical fabric and playing an important part in our future success. In this 60-second interview series, we’ll speak with some of our own employees to learn more about their culture and how they celebrate Asian/Pacific American Heritage Month.

I’ve been with Envoy an astounding three years and seven months to be exact. I first joined Envoy as a General Manager for Del Rio, Texas. Then I took on a temporary duty position in Madison in January 2020 where I was eventually promoted to General Manager for MSN, and I have been here ever since.

My day-to-day responsibilities consist of maintaining company standards of safety and security for employees and our customers. I establish relationships through engagement, collaboration, and inclusiveness with internal and external stakeholders. 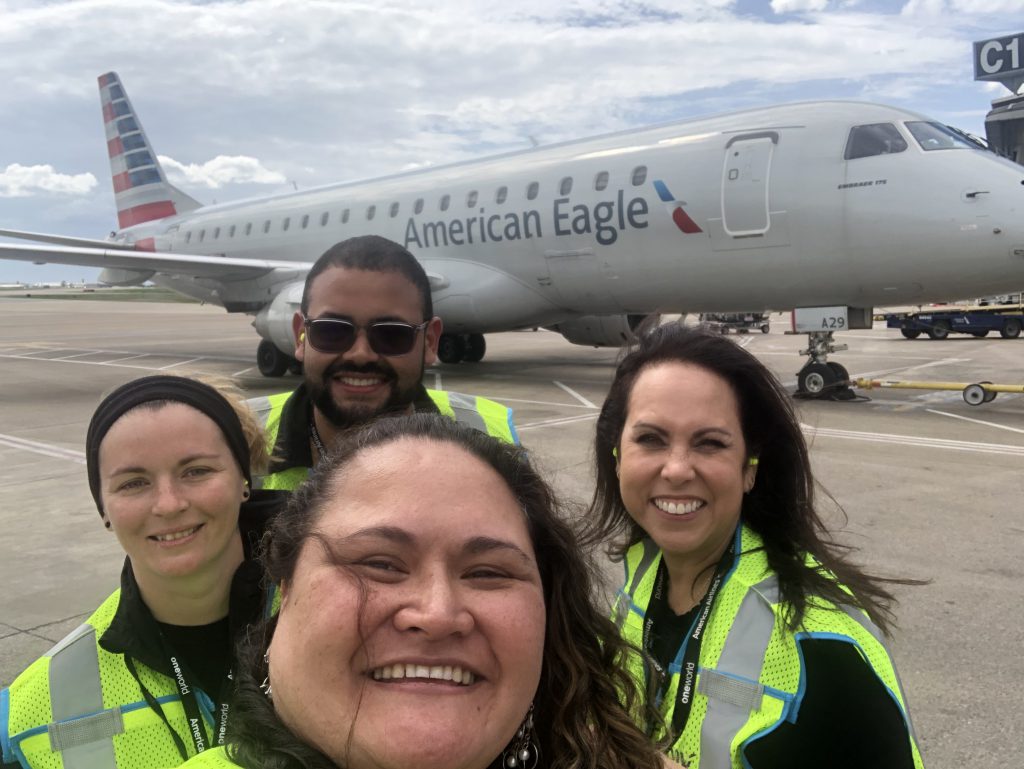 Tofuola Clark (center) with her Envoy colleagues at MSN airport next to an E175 aircraft. (Photo courtesy of Tofuola Clark.)

I also act as liaison between the Envoy and our parent company, American Airlines, as well as various other airlines and organizations. I also preserve the integrity and ethical values of the station as it relates to audits, compliance and regulatory mandates.

What’s the significance of Asian Pacific American Heritage Month to you?

It’s important to have a month that recognizes my Asian American and Pacific Islander people. It also educates the world about our background, cultures, and what makes us unique.

There’s some misconceptions that we still live in huts and wear grass skirts back home in American Samoa and the Samoan islands. However, people forget that American Samoa became a U.S territory starting in 1900, and the Manu’a islands followed suit in 1904.

Do you have any favorite historical figures?

Yes, Uinifareti Rapi Sotoa (pictured above), a student of my alma-mater Samoana High School, is one of my all-time favorite historical figures. He entered into a flag design contest at Samoana High School, having the winning submission featuring both U.S and Samoan flag art.

His flag design was officially adopted as the island’s first flag design on April 17, 1960. The red, white, and blue on the flag are traditional colors in both Samoa and the United States. The eagle soaring holds in its talons two traditional Samoan emblems, a fly whisk (fue) and a war club (uatogi). These items symbolize the wisdom of Samoa’s traditional chiefs, and the power of the state.

“She proves them all wrong.” 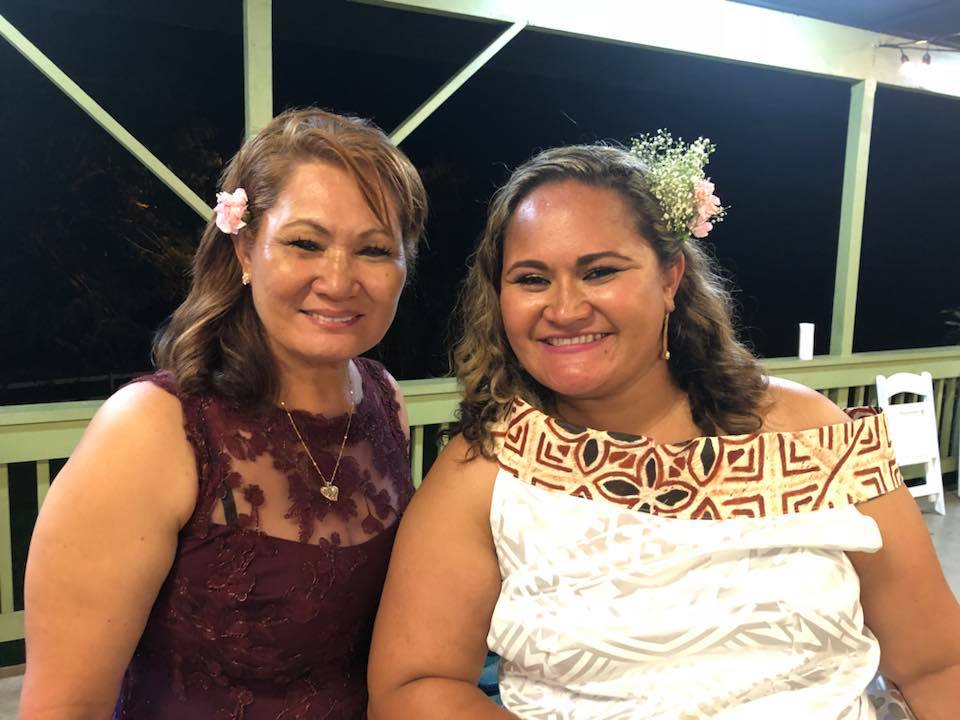 Who in your life has inspired you or is your role model?

My mother, Dr. Va’asaUluiva Simanu, is my inspiration. When the world tells that woman, “No” and that she can’t do it, she proves them all wrong.

My mother is an alluring person inside and out with a beautiful soul. She is smart, a workaholic, a goal getter, woman boss, and classy in her own way.

In 2020, she ran for House representative District #4 Saole in American Samoa. Unfortunately, she did not win, however; in my eyes she is a winner.

What she did was not just inspiring to me but to others as well. Growing up in a male-dominate island and culture, it is rare to see women hold high positions in the government back home and getting into politics. In this day and age, women are coming up and finding their voice and place on our island while making a positive changes — I just love that!

How do you like to show your Asian Pacific American Pride?

I display my Asian Pacific American Pride by wearing my Samoan Traditional attire (puletasi) with a flower on my left ear, which identifies that I am married.

“You can accomplish all things.” 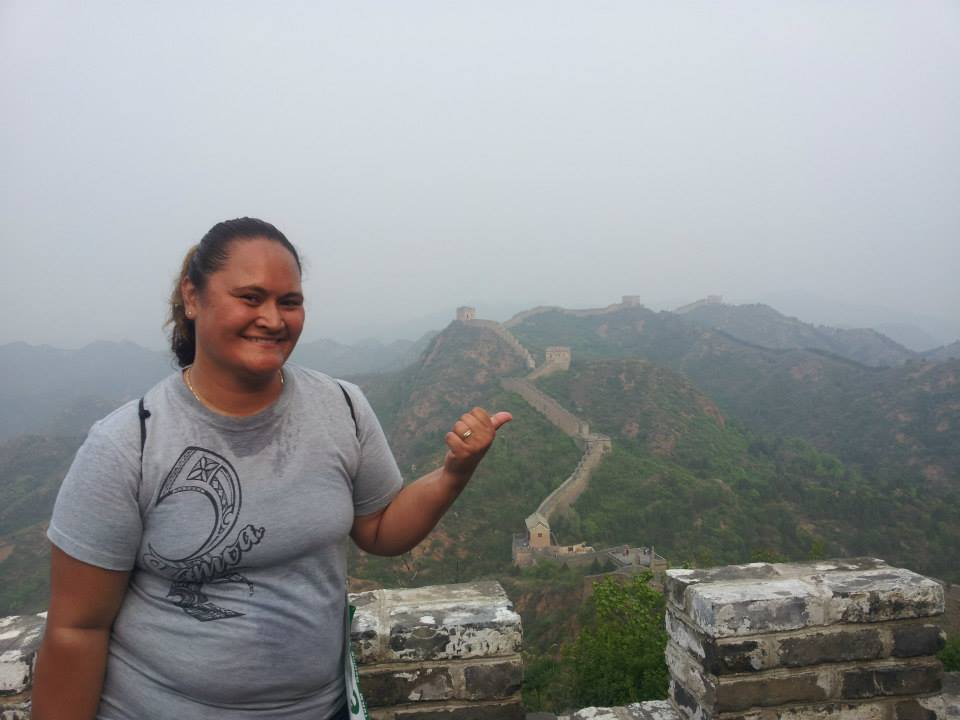 Tofuola Clark at the Great Wall of China during an unexpected 5K hike. (Photo courtesy of Tofuola Clark.)

Tell us one surprising fact about yourself that others may not know?

In 2014, my cousin Cara Frye and I participated in The 13th Great Wall of China Marathon. She was the reason why we were there. I was supposed to be a spectator taking pictures for her website. (Everyone that knows me knows I love taking pictures.)

Anyway, there was a mix up to where I ended up participating in the 10K. Long story short, I did not train for this 10K, the coordinator handed me a backpack and said I was a warrior. I took that statement and completed a 5K instead and received a medal.

My grandfather Saiuala Uluiva Simanu would say, “aua le pala ai mea uma e fai le loto ma le fatu,” which means “don’t be scared, you accomplish all things if you have the guts and the heart to do it.”