Captain Nicole Cardin was not your typical 16-year-old. Most teenagers are clamoring to get behind the wheel of a car in anticipation of earning their driver’s license. To Nicole, the driver’s license took backseat to her most coveted certification, her pilot’s license.

Her father was a pilot, and growing up Nicole and her family inherited his love for aviation. At 13-years-old, her father encouraged her to take flight lessons, and finally she embarked on her first flight in a Cessna 150. To make the moment even more special, her discovery flight included an expert landing at the Wright Brothers Memorial in Kill Devil Hills, North Carolina.

Right off the bat Nicole knew she wanted to be a pilot for the rest of her life. She says that every decision after that first flight lesson was aimed at a career in aviation. The “go-getter” that she was, she earned her first job at Spirit of St. Louis Airport (SUS) as a fueler and ramper.

Now, the 37-year-old Nicole Cardin has gone from teenage fueler to Envoy Captain. She always knew she wanted to be a pilot, but there’s only one reason Nicole chose Envoy for her and her family; stability.

“Envoy at the time, when I got hired on with them, they were largest regional and connected to American,” said Nicole. “That to me equated to stability. I definitely knew that I wanted to go to company that had a long and fruitful future and the possibility of continuing my career at a major as well.”

Nicole rarely thinks of herself as a female aviator until an enthusiastic passenger commends Nicole with a cheer of “Girl Power!” or “It’s so awesome to see a girl up here!” Although only about 6 percent of all pilots in the U.S. are women, according to the Federal Aviation Administration, Nicole said she never feels like she’s disadvantaged. 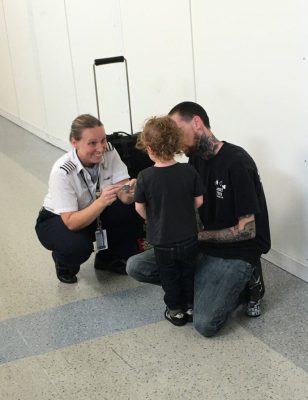 Unfortunately, Nicole notices that some women do feel the pressure of working as a female aviator in a male-dominated occupation. Whether it’s the lack of a supportive upbringing or negative comments from coworkers and passengers, it weighs on them, Nicole said.

“Ultimately, I know for myself and the people who are close to me know that I worked my buns off,” Nicole said. “I did the same thing that everybody else did. Nobody ever handed me anything. That helps me sleep at night because I know I did it and any woman can do it.”

There was a time, however, that Nicole almost diverted from her career path. After high school, she was prepared to join the Navy to become a pilot. She believed that was the only way. A week away from joining the U.S. Naval Academy, the dread of constant verbal battery and inevitable conformity forced her to take a different route.

Nicole enrolled at the University of Dallas to undertake a Bachelor of Arts degree in Theatre with a minor in French – quite the diversion from the military. Still, her father had not given up his daughter’s dream of becoming an airline pilot. He called her up one day during her senior year at UTD with the some great news. He had just read about a flight school that would help expedite her path to an airline. That was all Nicole needed to hear before she enrolled at the Delta Connection Academy, now named the Aerosim Flight Academy, in Sanford, Florida.

In 2005, Nicole completed her flight hours and was hired at Envoy Air. She has never looked back, she said. She has a stable job that allows her to see her husband and two children three days out of the week. As a female pilot, she has the solace of knowing she works for a company that will support her.

“Any woman that’s considering going into aviation should never have any hang-ups, because once you make it to this point, the companies support you,” Nicole said. “My company supports me as a female aviator. My company, the job, the rules in place here are there to uphold professionalism. The company will stand behind me 100 percent. I have no doubt of that.”