After retiring from the U.S. Navy, Commander Andrew Danko was looking for an opportunity to use his military-helicopter pilot experience to transition into a career with a commercial airline. The challenge was to find an airline that would count his rotor experience toward his Airline Transport Pilot (ATP) hours.

After contacting numerous airlines and finding no answer, Andrew got word of a new military-transition program starting at Coast Flight Training in San Diego, California. That program, in fact, was the beginning stages of Envoy’s new Rotor Transition Program (RTP) that helps military helicopter pilots transition to a commercial flight deck.

As a helicopter pilot, Andrew had plenty of hours, but not the specific Pilot-in-Command hours on a fixed-wing airplane. That time would need to be made up, and paid for out-of-pocket if Andrew wanted to pursue a commercial-pilot career.

As part of Envoy’s RTP, Andrew received help to finance the hours he needed and instruction at Envoy’s partner school, Coast Flight Training.

“Envoy told me they value my military training and they value my expertise,” says Andrew. “It’s nice to come into an environment where you’re appreciated for your skills and your experience.” 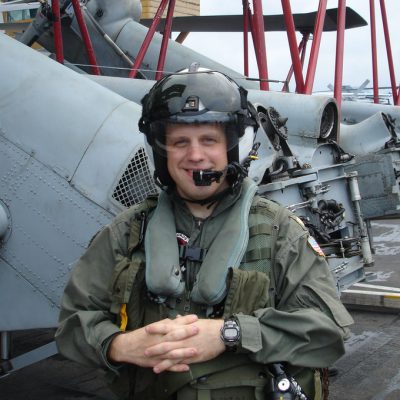 Military rotor pilots have a broad skill set that translates well into the commercial airline industry.

Andrew explains that his experience in the military makes him quick to adapt, as well as hardworking, detail-oriented, motivated by serving others and able to fill leadership roles.

He also mentions that the helicopter he flew had twin-turbine engines with hydraulically boosted flight controls, AC/DC powered avionics and a maximum gross weight of 22,000 pounds.

Additionally, Andrew trained with a three-person crew that taught him the importance of crew resource management.

“After looking at the problem airlines face with pilot shortages, I noticed Envoy’s innovation in a problem we’re all facing,” says Andrew. “Envoy is light, innovative, they’re ahead of it – they’re going to be in great shape.” 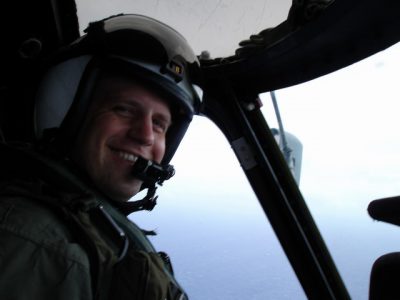 Andrew recently retired from the U.S. Navy after 23 years of service as an O-5 Commander. Andrew worked as Commander of a weapons school in Jacksonville, Florida where he trained pilot units before their deployment.

Next, Andrew served as Air Boss in San Diego on board an aircraft carrier in the Pacific. After two years of conducting flight operations, Andrew retired from the U.S. Navy.

Retirement wouldn’t mean the end of Andrew’s aviation career. He joined Envoy’s RTP in July, earned all of his ATP hours in August, began training with Envoy in September and is on course to begin generating revenue as an Envoy First Officer as early as mid-November.

He couldn’t be more at ease with his decision.

“I had a lot of choices where to continue my pilot career,” says Andrew. “After researching all of my options, Envoy was the place to come and to bring my family. Without a doubt.”

Are you a military helicopter pilot interested in a commercial aviation career? Click here to learn more about Envoy’s Rotor Transition Program.