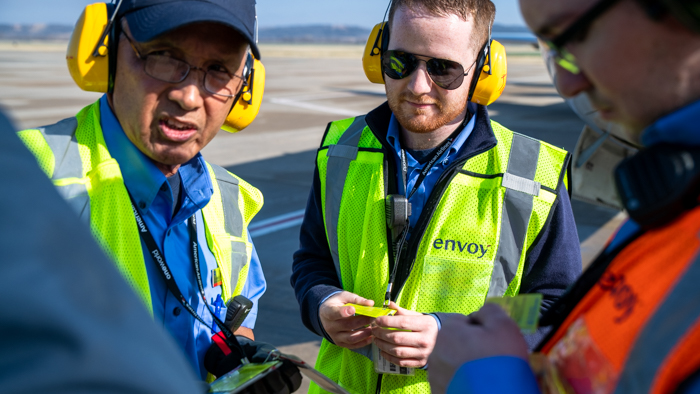 As part of the Envoy Team, when it comes to facing the enormous challenges and adversity the airline industry can throw your way, there is hardly ever an option for you to go it alone. That’s because at Envoy, we are like family.

In this tireless year of uncertainty, we’ve learned to lean on each other more and more as the hardships pile on. However, just like every year, that hardship includes hurricane season for our coastal airports.

On August 26, Hurricane Laura made landfall in Lousiana. At Lake Charles Regional Airport (LCH), there was only one thing on Kertina Rutledge’s mind.

“My main concern is where are my employees going to go?” said Kertina, Envoy General Manager of LCH.  “The folks who are staying, are they going to be okay? Do I need to bring some folks with me? How bad is this storm going to affect the airport?”

So many questions can swirl around one’s head in moments like these, and that’s why preparedness and communication is key in staying the course toward safety. Whether it’s checklists, group chats or team meetings, having everyone on the same page is crucial.

“Communication is vital in every situation, especially during a storm,” Kertina said. “Keeping in touch with everyone and understanding what each person needs helps everyone seamlessly return and give it their all. Such an amazing display of teamwork.”

In Beaumont, Texas, the general manager has seen fair share of storms head her way since working at Jacks Brooks Regional Airport (BPT) since 2000. Demarilis López, a native to Puerto Rico, maintains that staying in touch with airport and city authorities is a helpful support net for her team.

Since their airport serves as an emergency evacuation zone for the city, that relationship is imperative during storm season. Just like Kertina in LCH, Demarilis said that nothing is more important than the safety of her people.

During hurricane Harvey in 2016, one of her agent’s house flooded and it was her coworkers that literally rescued her by boat. After that, her team and others from around the Envoy system sent her supplies for her time in need.

“That’s what family is all about,” said Demarilis. “We unite stronger around situations like this, and we help each other.”

This year, Kertina said that a few of her agents were displaced due to mandatory evacuations. Nevertheless, they stayed in touch via their group chat to keep tabs and provide help where needed.

“We have a family environment here, always have,” said Kertina, who has spent nearly a decade working at LCH. “They put their hearts and souls into every flight they work. Good, bad or ugly; rain or shine, we know someone always has your back.”

That’s one thing that will never change no matter the turbulence in the world — we’re like family.