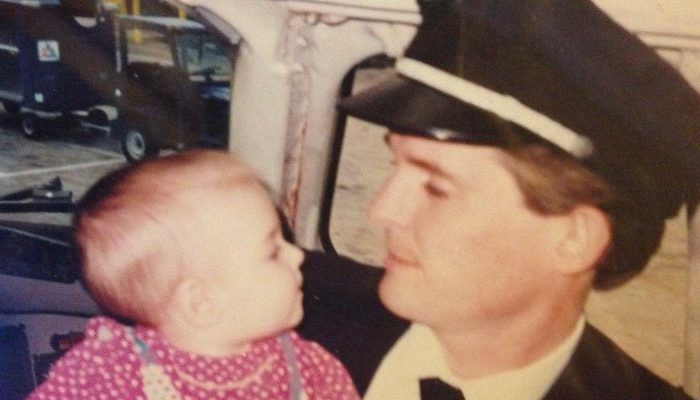 In the pilot world, it’s not uncommon to see an entire family of aviators. Whether the genesis is grandpa, grandma, aunt, uncle or dad, some families just have flying in their genes.

This Father’s Day, we’re sharing the story of a daughter-father duo who have a long history of adventuring together. Let’s hear from Envoy First Officer-in training Caroline Hale and her dad, American Airlines Captain Kerry Pruitt. 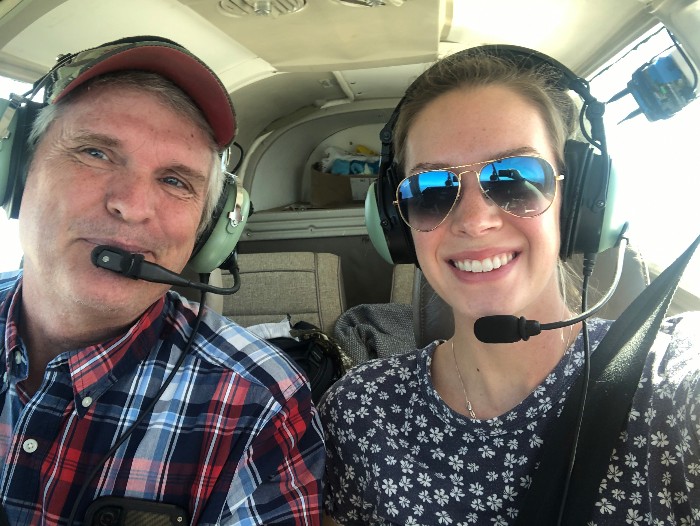 Tell us a little bit about your background, like are there any other aviators in the family or what aircraft have you flown?

Kerry: I’m 59 years old, and have been based at Dallas-Fort Worth Airport for the last 31 years. I got my associate degree in aviation maintenance from Tarrant County Junior College in 1996.

When were you bit by the “flying bug?”

Caroline: I’ve been fascinated with flight since I was about four or five years old, ever since I watched the movie Peter Pan. As a kid, I was constantly jumping off things trying to fly!

I didn’t officially start flight training until a year after I graduated college, but I was always drawn to it. After college, I knew that I needed to do whatever it took to make the dream a reality.

Kerry: It all started when I was five years old. The excitement of seeing an airplane always amazed me, even to this day.

What is your favorite part of being a pilot?

Caroline: Flying a plane is so fun and freeing, yet challenging and humbling. It’s the perfect blend of intellect, skill, and adventure.

Becoming a pilot has changed my life, and as for becoming an airline pilot, that has always been the ultimate goal.

Kerry: The most exciting thing to me, even today after flying airplanes for more than 45 years, is the joy of getting to do it. After nearly 28,000 hours, every hour is as exciting as the first. 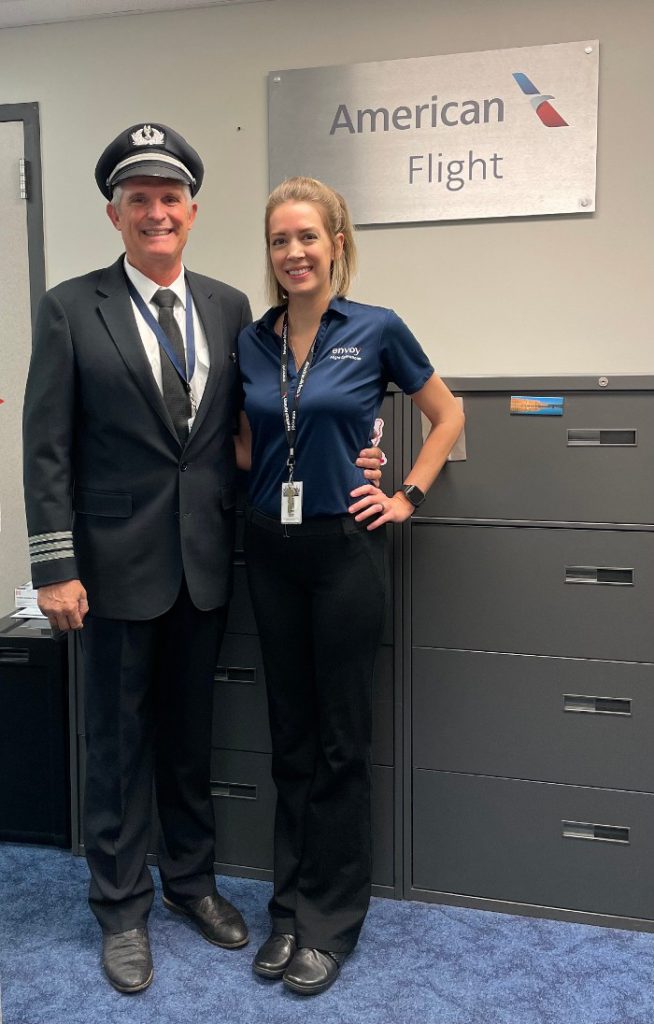 Why did you choose Envoy and American Airlines?

Kerry: When I was flying corporate jets, I met a 747 Captain named Jack Redgate who worked for American, and he personally handed in my application to the airline. If it were not for Jack, I’m not sure where I would be today.

Caroline: Growing up, I was always very proud to answer the question of “What does your dad do?” with, “He’s a pilot at American Airlines.”

So when it came my turn to choose an airline, I was thankful that the American Airlines Cadet Academy provided me the opportunity for financing, which allowed me to commit to full-time flight training.

When I became an instructor, I wanted to continue my commitment to American by joining the Envoy Cadet program, enticed by the professionalism and integrity of the company as a whole.

Now, I will soon be flying the E175 here at Envoy and couldn’t be happier! 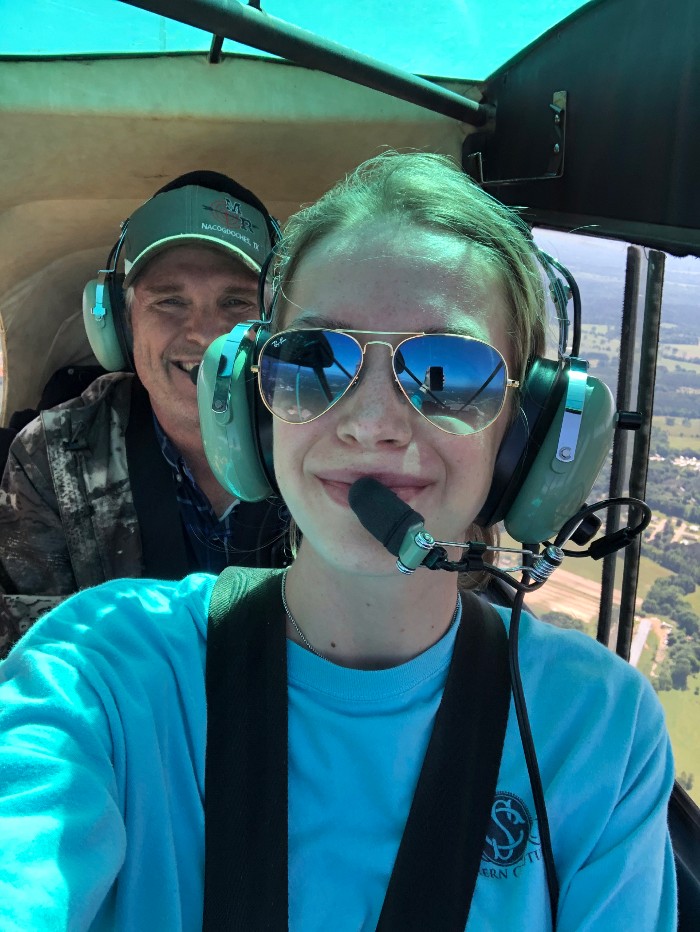 What was it like growing up with a pilot dad?

Caroline: It was challenging when I was very young when he was gone for trips. However, I adapted and learned over time how awesome of a job he has.

The cool part was that when he was home, he was actually home with us instead of being at a “normal” job all day. I think overall, I got to spend more quality time with him because of that.

How has having a pilot dad benefitted your career as a pilot?

Caroline: Throughout my entire life, my dad has been an incredible role model and mentor. He’s shown me through example and guidance how to work hard, live with integrity and grit, and achieve my dreams.

Something he started saying to me when I started flight training is, “Blue side up,” in reference to the attitude indicator. In other words, always fly safe, keep it simple, and stay positive.

Adventures yet to come

What’s the plan for your respective careers?

Caroline: I am ecstatic and grateful that I have made it this far. I plan to keep progressing, and to enjoy every step in this incredible career.

Kerry: I am not sure we will be able to fly together as pilots, because I have less than six years left until retirement.  However, my objective is to ride on her jump seat and she can ride on mine. That would be the ultimate career opportunity for me.

As for Caroline, I’m so proud that she has has an amazing career ahead of her. The future is extremely exciting for her.

Dad, the floor is yours. Any closing thoughts?

Kerry: Yes, I have been so fortunate to have two wonderful daughters and a beautiful wife of 35 years. I am so proud of both of my daughters; one as a pilot and the other in the medical field.

I want to thank everyone at American for giving me the opportunity to spend more than 38 years when I retire with greatest airline in the world.

06.17.22 / Envoy pilot follows the footsteps of her American Airlines dad