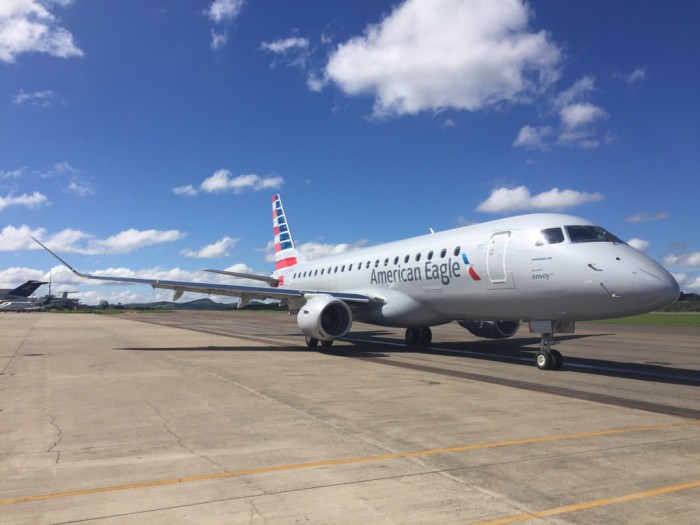 Ever wondered what happens when we collect our brand-new Embraer 175 (E175) aircraft from the Embraer factory in Brazil? Here’s the scoop.

On arrival in Brazil, Embraer collects Envoy personnel from the airport and shuttles them to their factory in São José dos Campos. “They have a really strong process in place for you when you arrive, and everything is on schedule” said Envoy Check Airman, Captain Jon Reibach.

From there, Envoy pilots meet with Embraer officials and the Embraer test pilots who will accompany them on the acceptance flight.

After the initial paperwork is complete, it’s time to take the new plane out for a spin. Typically, a new plane will have about four to eight hours of factory flying time prior to an acceptance flight.

“The Envoy pilot takes the left seat, while an Embraer pilot sits on the right,” said E175 Fleet Manager, Captain Graham Kyle. “A small Embraer Maintenance team is also on board as well. On the ground, we perform a full range of tests, including testing backup systems, brakes, electrical and hydraulics.”

Once the ground tests are complete, it’s time to fly.

The new plane takes off and ascends to 41,000 feet. At this altitude, pilots remove automatic controls to test the airplane’s trim while a team of Embraer Mechanics closely inspect internal fixtures to ensure proper cabin pressurization.

The plane then descends to 30,000 feet to test load, and then to 14,000 feet to test the Auxiliary Power Unit (APU). Other tests include a “stick shaker” – a simulated disruption to air flow to ensure the aircraft performs as expected when performing maneuvers.

“Once all of these tests are done, we simulate different approaches to the airport,” added Jon Reibach. “These include CAT II [low visibility approach], missed approach and visual approach. All of these tests ensure that the plane performs as expected during these scenarios.”

After all the inflight tests – which totals approximately 2 hours of flying time – the plane lands and Embraer personnel make any necessary adjustments to the plane.

After the acceptance flight, a conference call is held between Envoy, American and Embraer to review paperwork and formally purchase the aircraft.

While the plane is prepared for its “ferry flight” to the United States, ANAC (Brazil’s equivalent of the FAA) inspects the plane. During this time, Envoy maintenance technicians update the plane’s FMS computer so that its systems can properly interface with Systems Operations Control (SOC), Integrated Operations Control (IOC) and other important operational equipment.

After formally accepting the plane, the new E175 flies from Embraer’s facility in São José dos Campos to Manaus (MAO) and on to Fort Lauderdale (FLL). After a quick crew swap, the plane then flies to Abilene (ABI) for conformity checks, Wi-Fi installation and FAA inspections. Once approved, the plane is ready to enter service.

Envoy will receive approximately two E175 aircraft every month from now through 2017. Every single E175 we receive will go through this process before entering service.

Thank you to Captains Graham Kyle and Jon Reibach for supplying the information used in this article. Additional credit goes to Envoy Technical Representatives Tim Nolan and Mary Ray for their manufacturing inspection work at Embraer’s facility in Brazil, as well as everyone who has helped to make the E175 project a success.